and the saga continues!... I am excited everytime one of your days gets posted... this is a trip I have been looking at doing with the same stops you did. Sounds like you've had a good time so far!
Top

I really did try surprise everyone and post more then one day at a time, but photobucket was acting up so I couldn't get the links for the pics..

Nice TR, great pics, love the bigger size!
What did catch the walleye on?
Top

We caught them on spoons (red & white Darevle), just like a pike. And one was caught on a bass spinner.
Top

Hi gang...miss you all. Never got around to writing my trip report from last September (first canoeing trip, we'll see if I can get around to it eventually)...graduate papers have been making use of my writing skills. Going to the island 8/8-8/16 this year. Anyone plan on being there during this time? Oh man...life needs to provide me with more time. I sure miss these forums and all of you wonderful people.


I'm thinking about a solo sometime over the labor day weekend timeframe. I think I'll be at Pictured Rocks the week you're on the island.
Top

One of these days hooky

Hi gang...miss you all. Never got around to writing my trip report from last September (first canoeing trip, we'll see if I can get around to it eventually)...graduate papers have been making use of my writing skills. Going to the island 8/8-8/16 this year. Anyone plan on being there during this time? Oh man...life needs to provide me with more time. I sure miss these forums and all of you wonderful people.


Hey Rafiki, I wont ask for, nor do I expect one of you Epic Trip Reports every time you visit. I can only imagine how time consuming that must be to put it all down into words. But how about a condensed version? I know it was your first paddling trip, so was it what you expected? Did you have good paddling weather? fishing? wildlife? Portages?

Btw, i will be one week behind you this year for my 9 day trip end of August.
Top

Ok.... Better late (5 YEARS!) than never....
After the first night on Wood lake, I woke up early and welcomed the sun as it rose. We had a great view of the birch trees reflected in Wood Lake.
For breakfast we found different berries around the camp site. Strawberries, raspberries, blueberries, and serviceberries (and another I forgot its name). 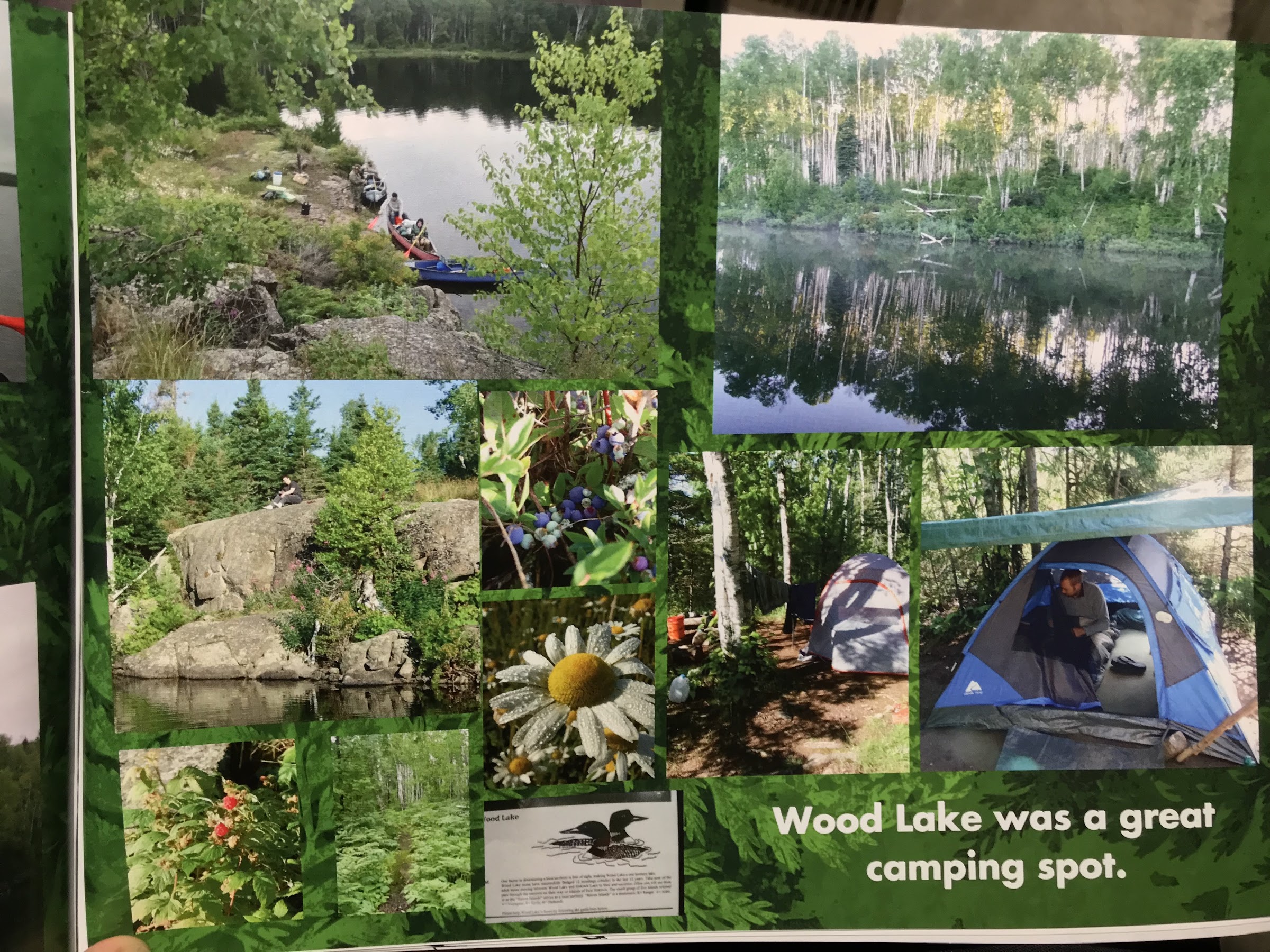 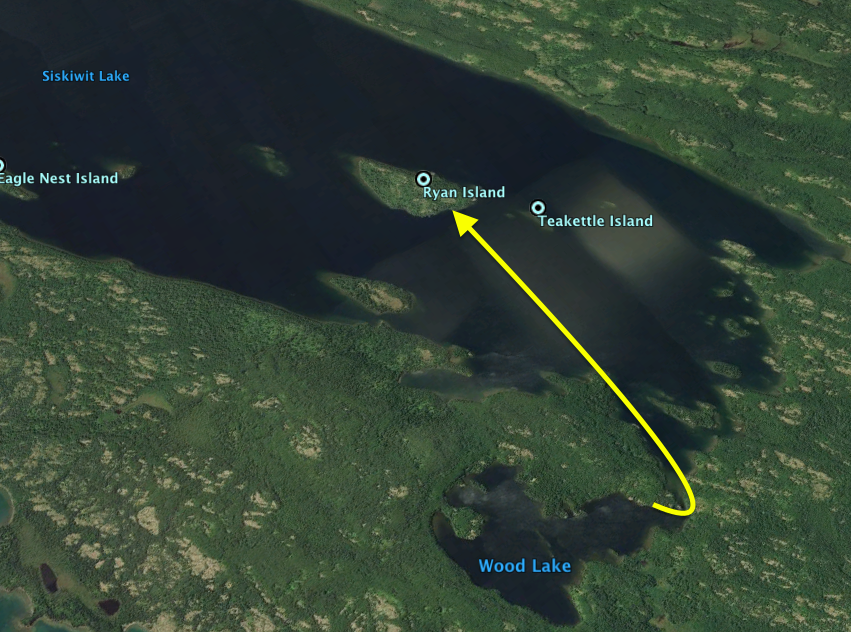 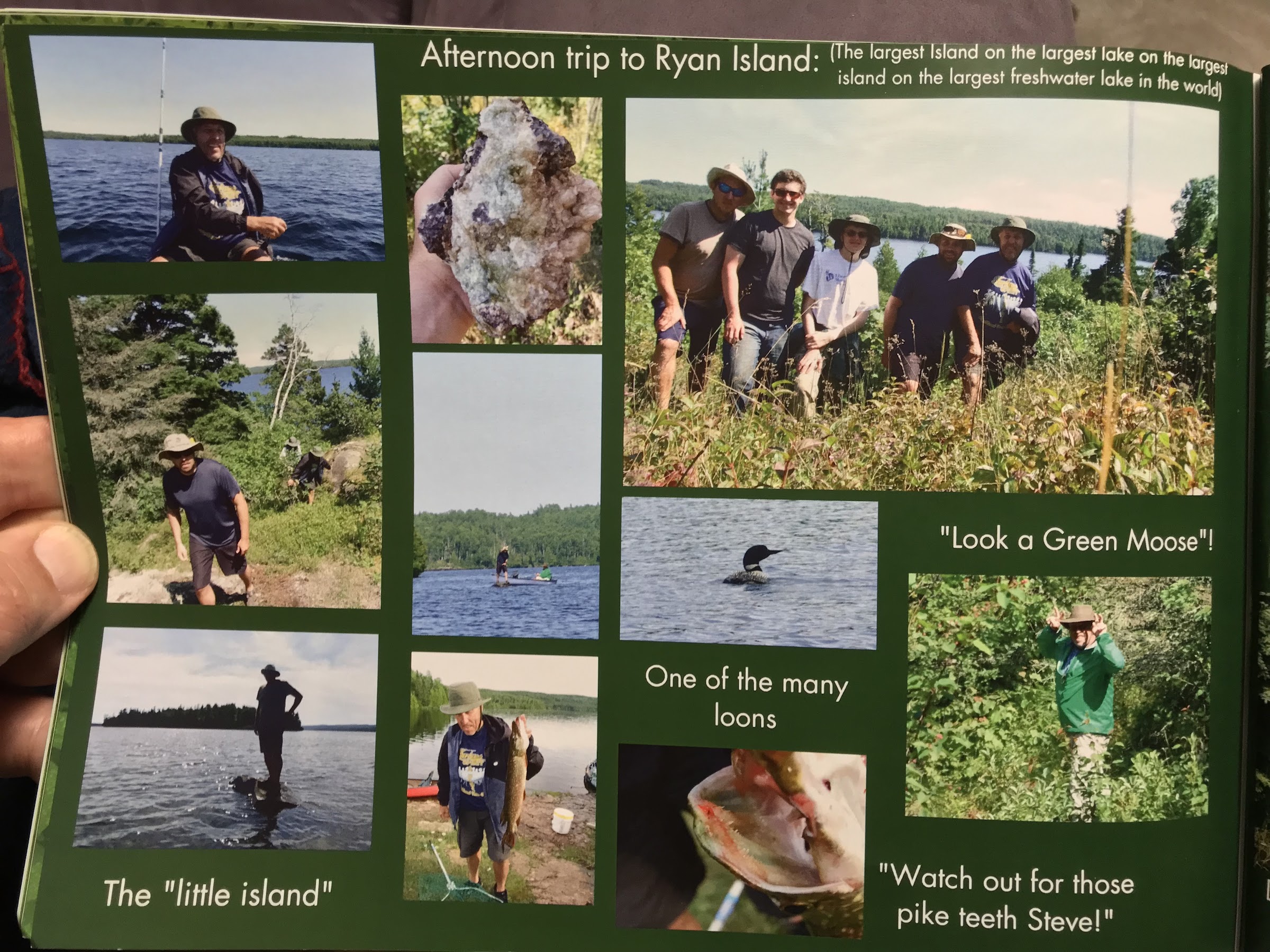 We hiked to the top, took this picture 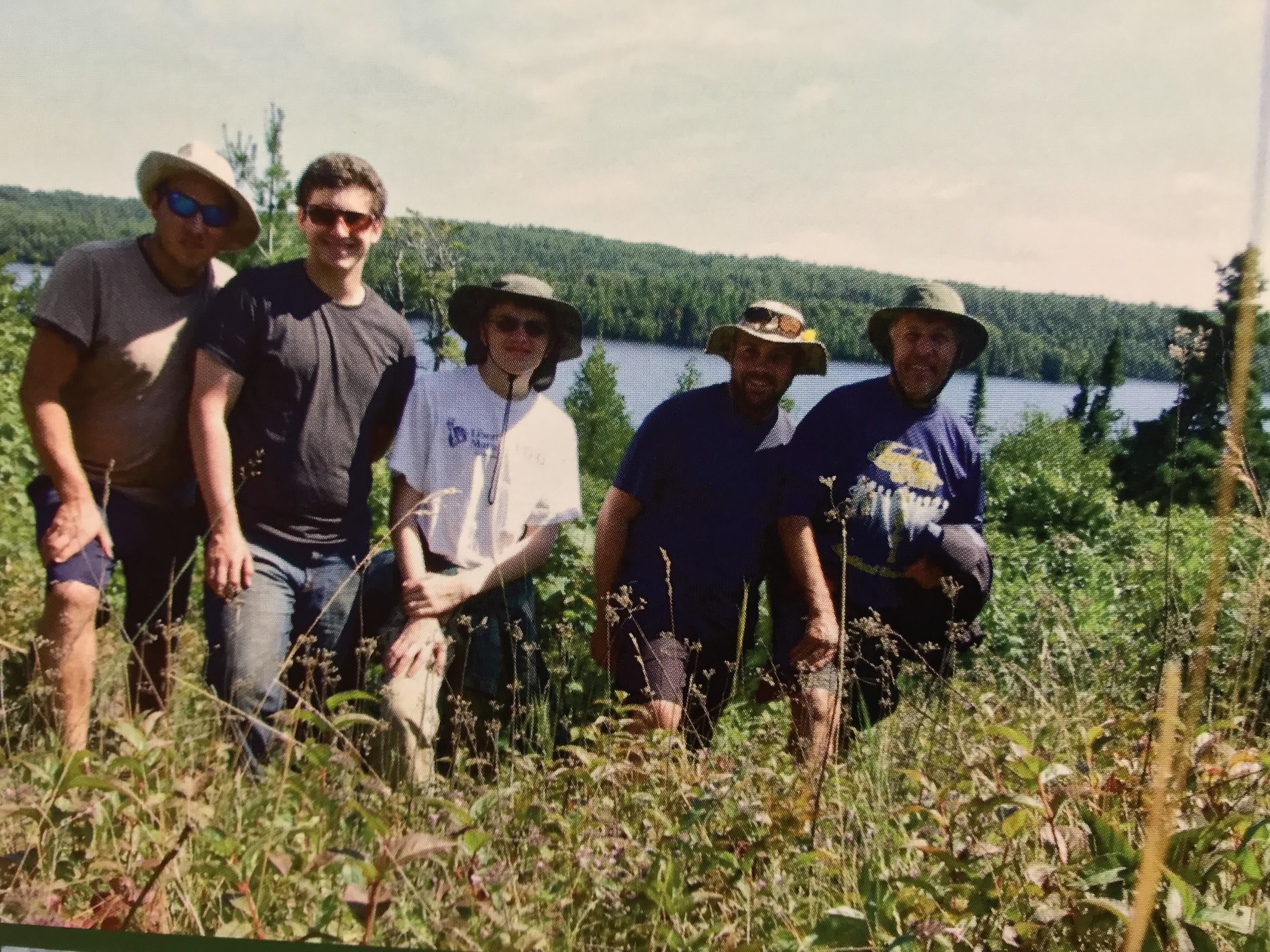 and swung by Teakettle Island on the return trip. I got out on the little rock just sticking out between Ryan & Teakettle for a photo op.
We fished every lure we had on the way back to Wood...but nothing... not even a nibble.
Steve and I continued to fish in Wood Lake, but it looked dead. Muddy bottom, nothing alive, but some patches of vegetation. As evening approached, Steve caught a nice pike that had come from Siskiwit into the narrow channel connecting it to Wood. That was the only fish we caught there. After dinner we retired for the night to the call of the many loons.
Wood Lake camp was the most scenic camping place of the trip.
Last edited by sgatz on Tue Jan 01, 2019 11:12 pm, edited 1 time in total.
Top

The next day Doug, Doug Jr., Quinn, and Tristin decided to beat it to Chippewa. They were tired of "roughing it" and wanted to get a shelter for our last two nights. They broke camp and moved quickly through Wittlesey, and into CH. Steve and I took more of our time and fished Whittlesey as we passed. While trolling along it's southern shore, Steve hooked onto a giant pike. It pulled very hard and swung the canoe around. As he pulled it in, I got the net. As it approached, we could see that it was the largest one of the trip. As we landed it, it came loose from the barb-less hook and we lounged to keep it. This started to tip the canoe which was loaded with all of our gear!

Steve bailed out one side and I went over the other side into the cold water.

We kept the canoe from completely capsizing. We swam it over to the shore and climbed out onto the rocks. A quick survey of our gear showed that we hadn't lost anything but the monster pike, our warm clothes (now cold and wet), and our pride. We changed into some dry tops and the pants dried soon in the sunny breeze as we traveled past the island to the west end portage. The portage take outs were FILLED with baby toads. 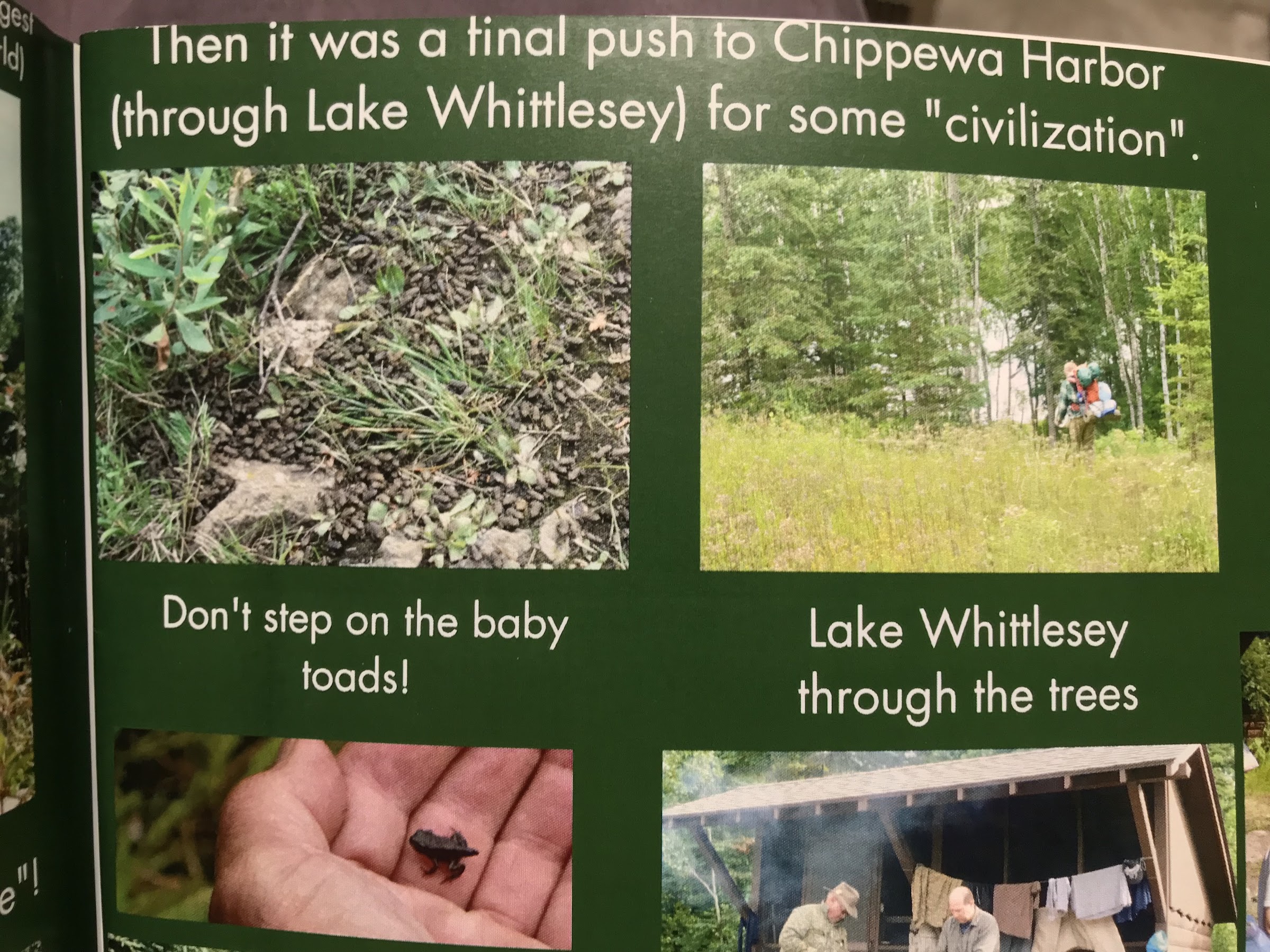 Chippewa - last few days
The others had made it safely (without incident) and had gotten a shelter. 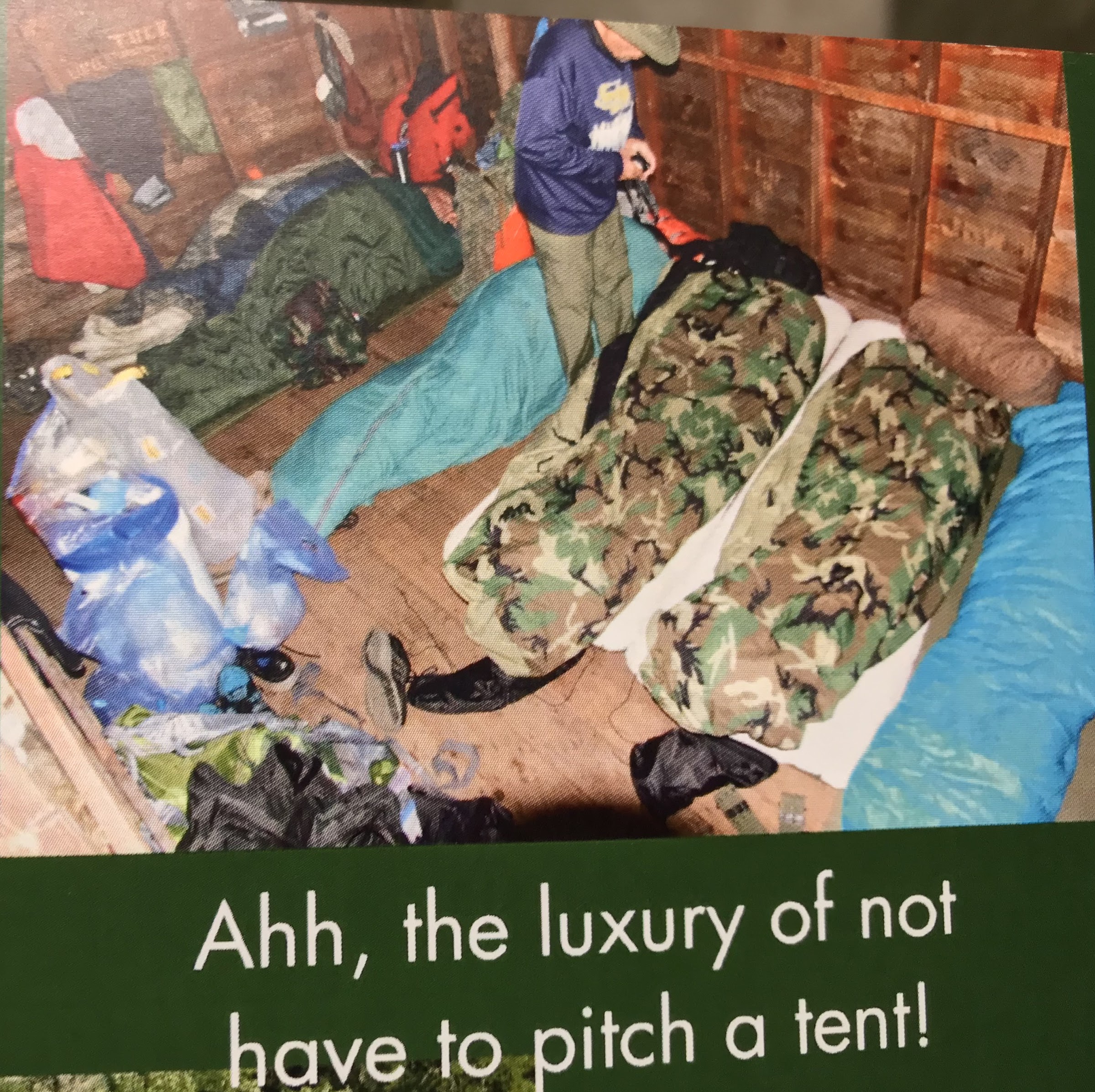 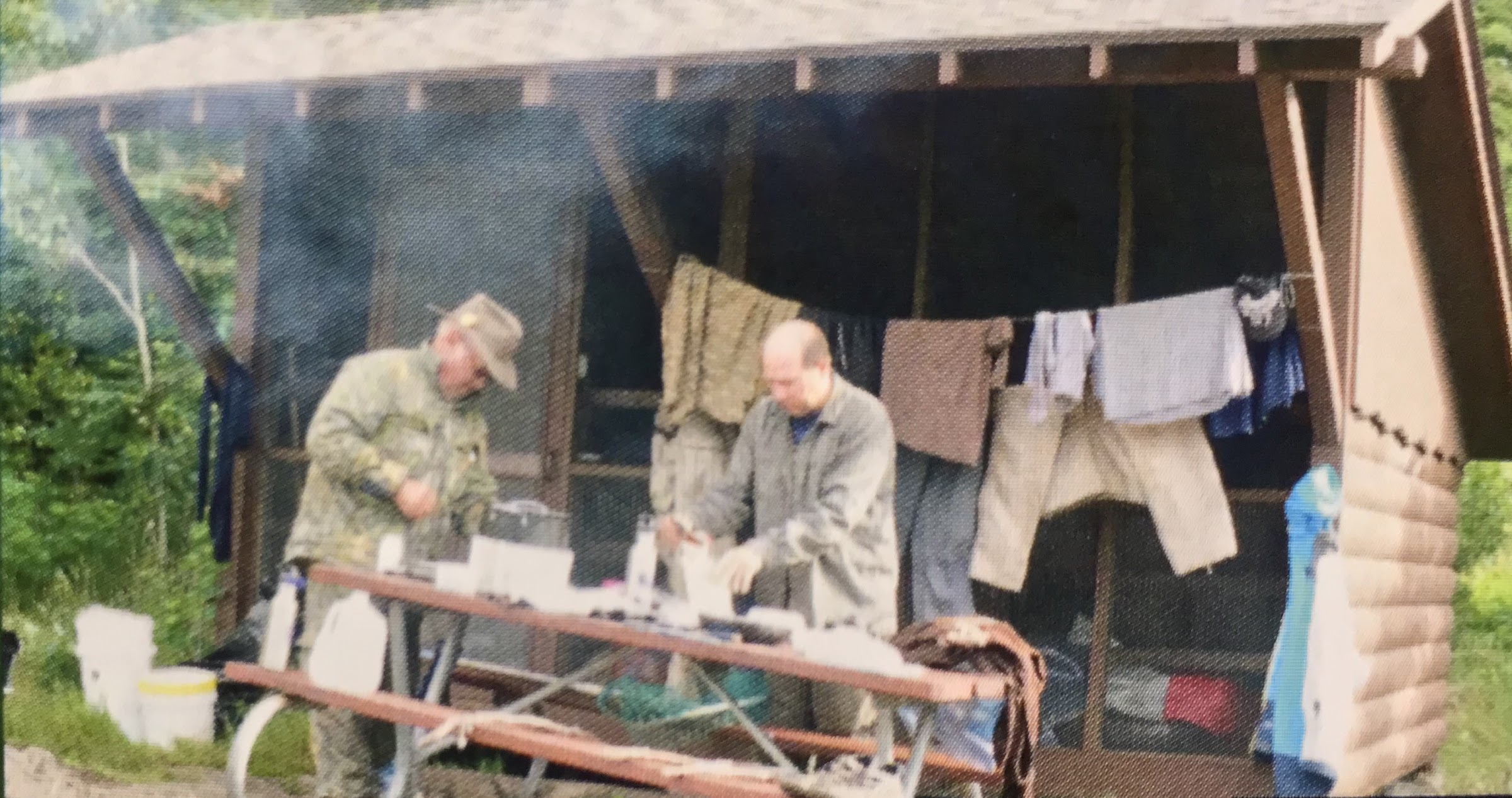 Steve and I went exploring around Lake Mason. Many years ago on a trip to IR, Steve and his brother-in-law, had caught a monster pike there. We didn't see much fishing action there this time. We hid our poles at the Indian Trail/Lake Mason junction and traveled up the trail toward Lake Richie in hopes of seeing a moose (we hadn't seen any yet

We saw some great areas where they could have been, but didn't see any.
The next day, Doug Sr. was fishing off the dock and FINALLY caught a perch. He had been trying to catch one the whole trip! 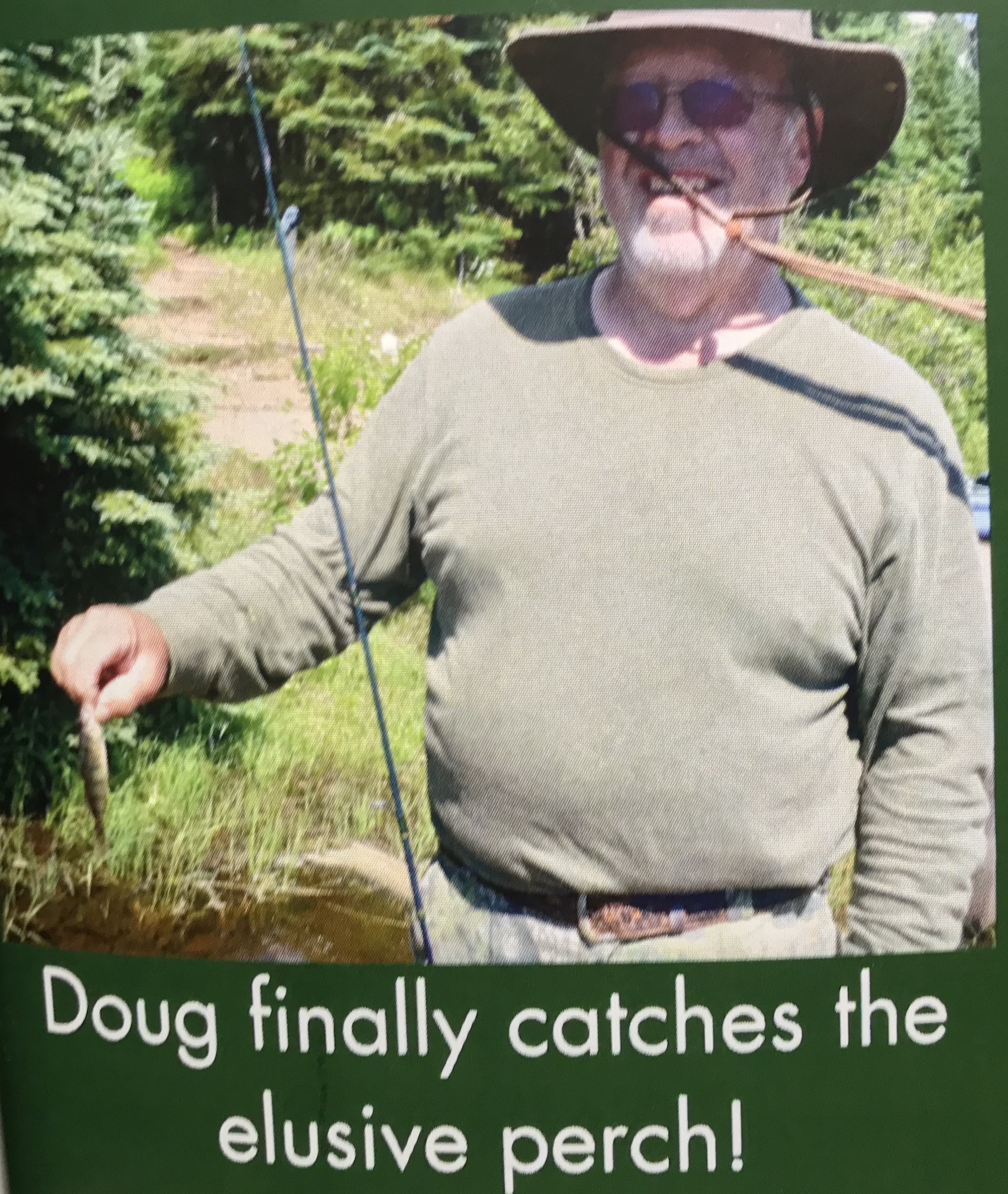 It was the largest perch caught! (only perch caught)
Steve and I went back out exploring. We paddled back up CH. Along the way we saw a mother duck with 3 small ducklings in tow. She was quietly quacking to them as we slowly approached along the shore line. All of a sudden she let out a strange sounding "QUACK", and all three ducklings quickly hopped up onto a log. The mother duck seemed agitated, but not at us. She put her head under the water and started darting to and fro. I looked down into the water and saw a big hungry pike. She dove down toward the pike and chased it off. After circling the area several times, head under water, she saw it was safe and gave her three another quack, and they were off paddling along the shore, ready to hop out again if needed.
Later that evening Steve an I went back out in the canoe to catch some dinner. We found several VERY productive spots in CH. It seems the pike stay in/near the very deep water during the day, but about the time the swarms of mosquitoes come out, the rise up out of the deep and hang out in the weedy shallows. The spot where the outlet stream from Lake Richie joins CH was great. 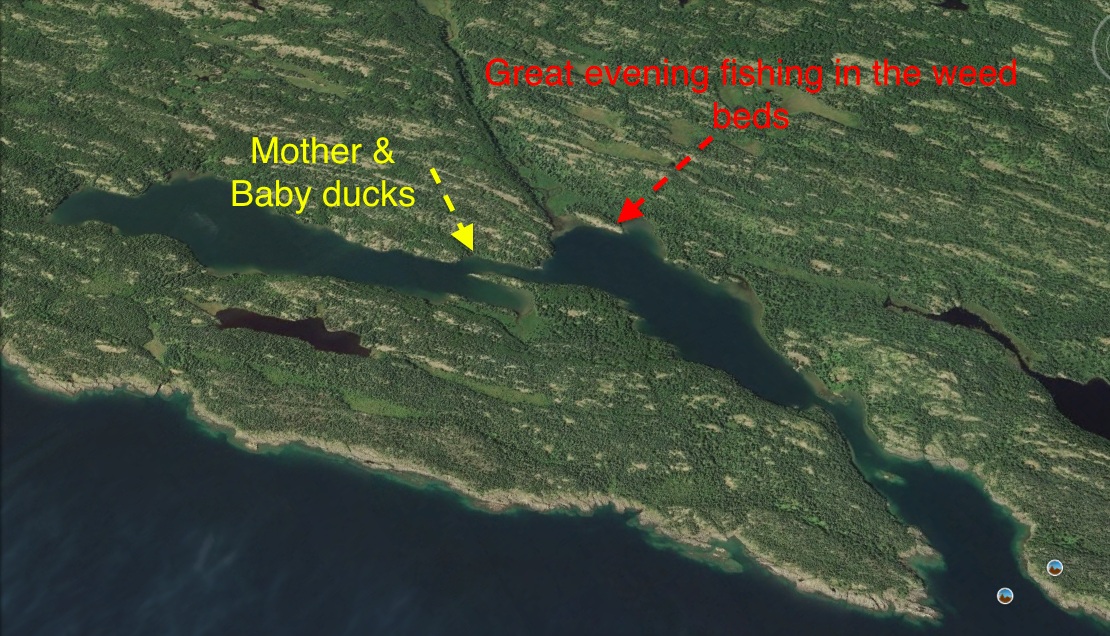 We quietly paddled up into the channels through the weed bed, and cast up the channel ahead of us. As soon as our lure smacked the water we could see wakes of the larger pike swimming to intercept it. It was exciting to know that in a few seconds you would have a strike. As the sun set the blood sucking "birds" got thick. We kept having to brush them away from our face nets just to see, and we finally called it quits. I think we were almost as hungry as the mosquitoes. We kept 4 pike (2 each) for dinner for the group. 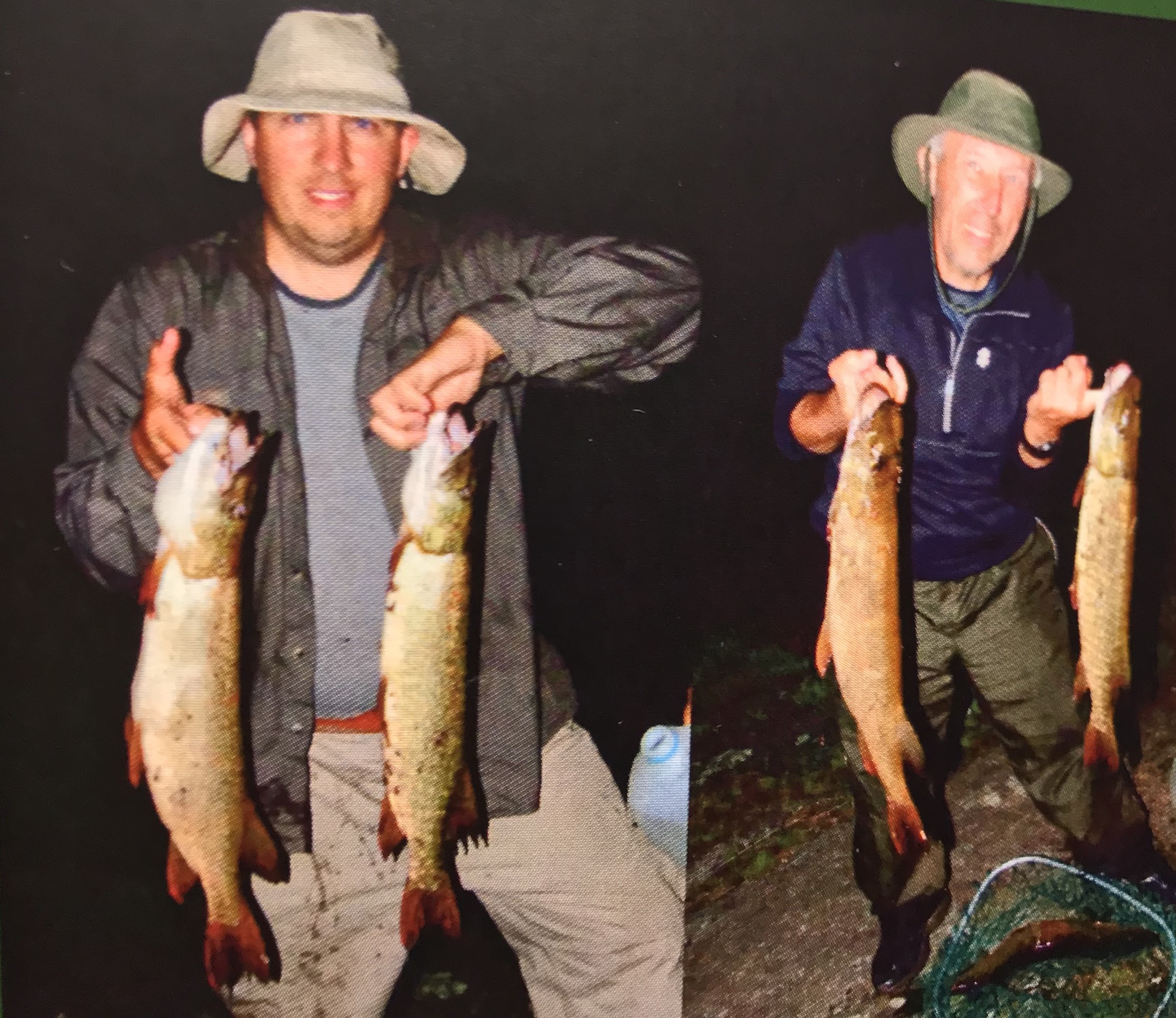 The last day...
We packed up... took some photos, and waited for the boat to pick us up. 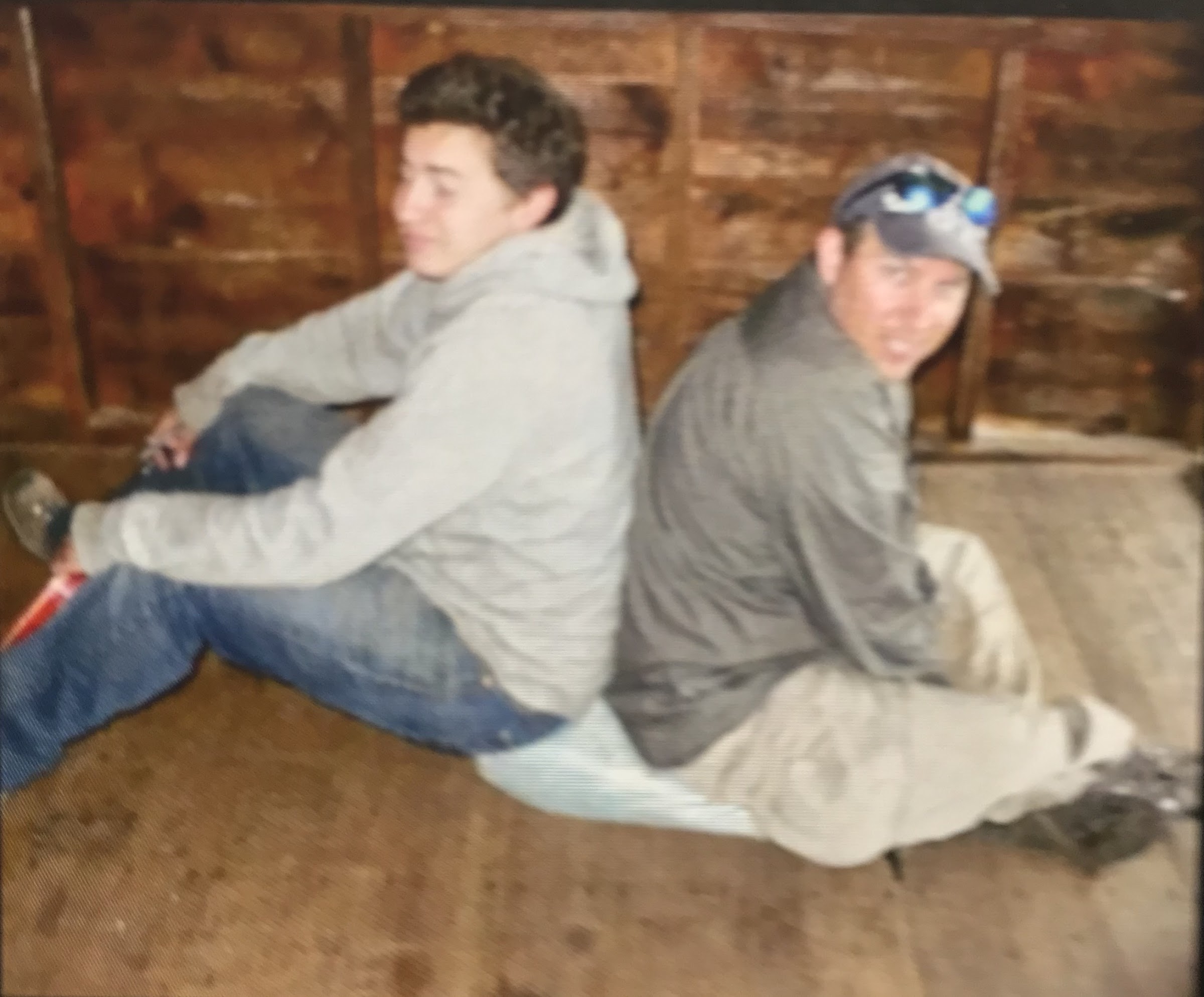 Quinn and I compress a sleeping bag. 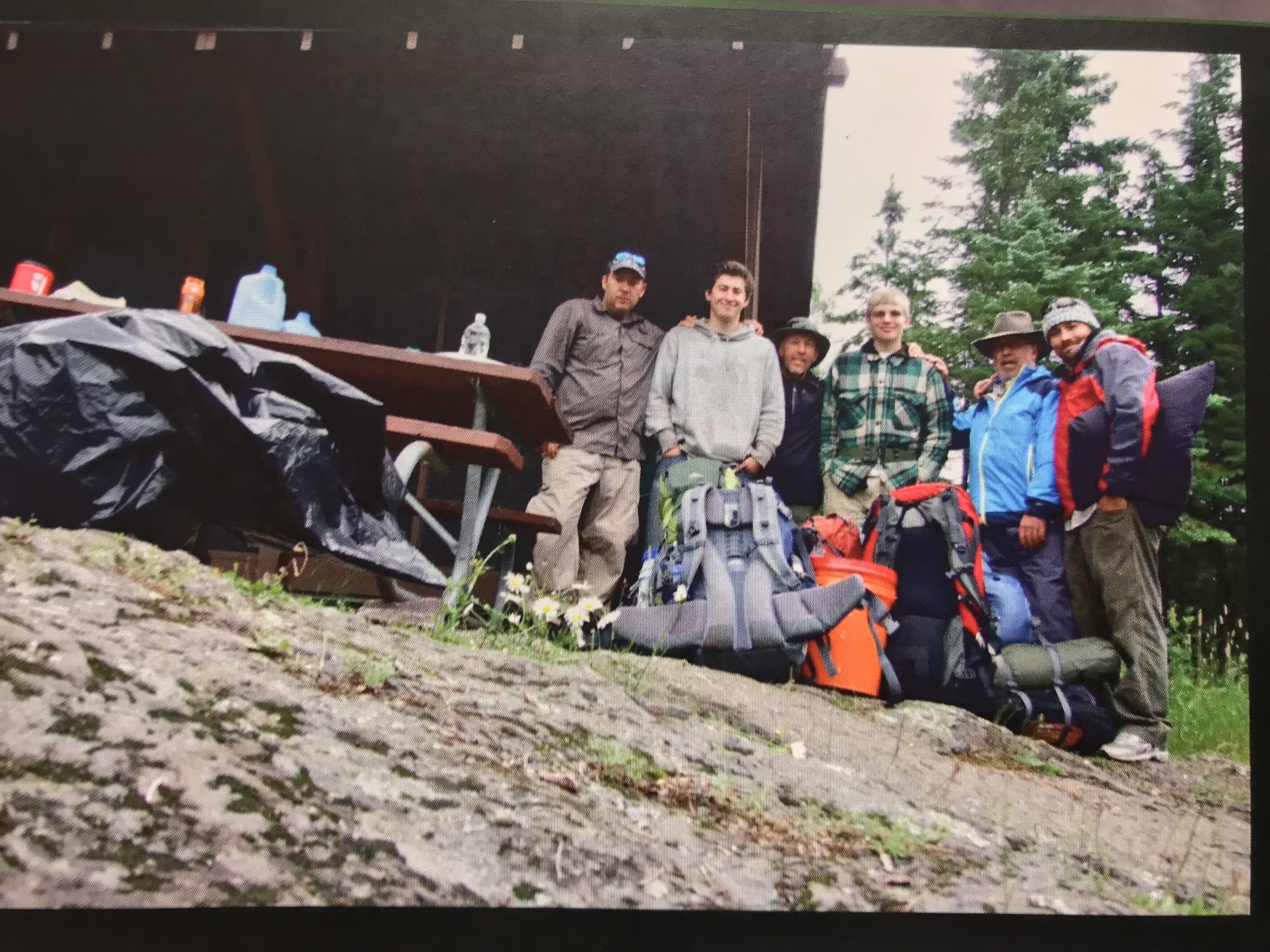 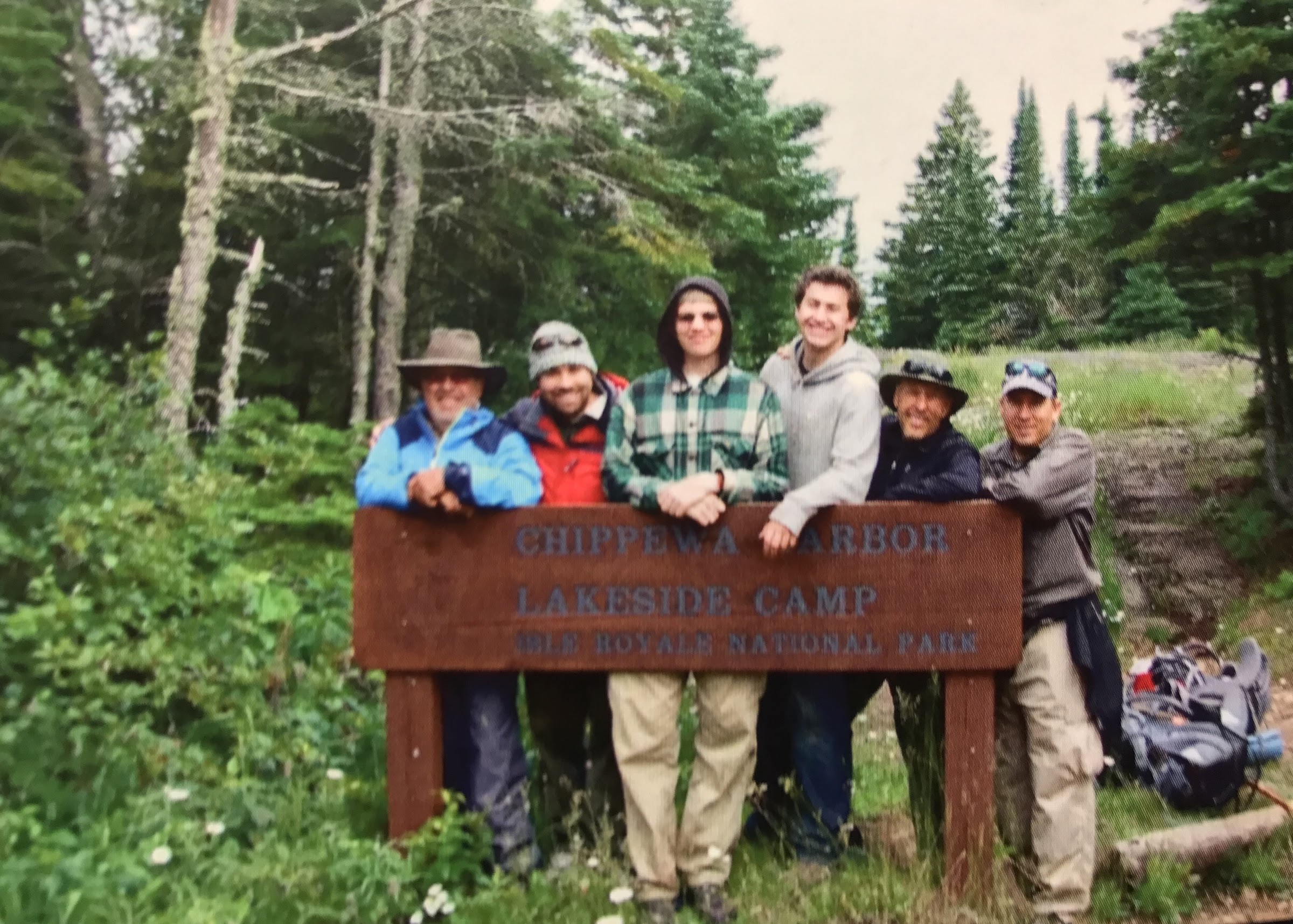 When the boat came we loaded up the canoes and Doug Jr. decided to take some of CH with him.... 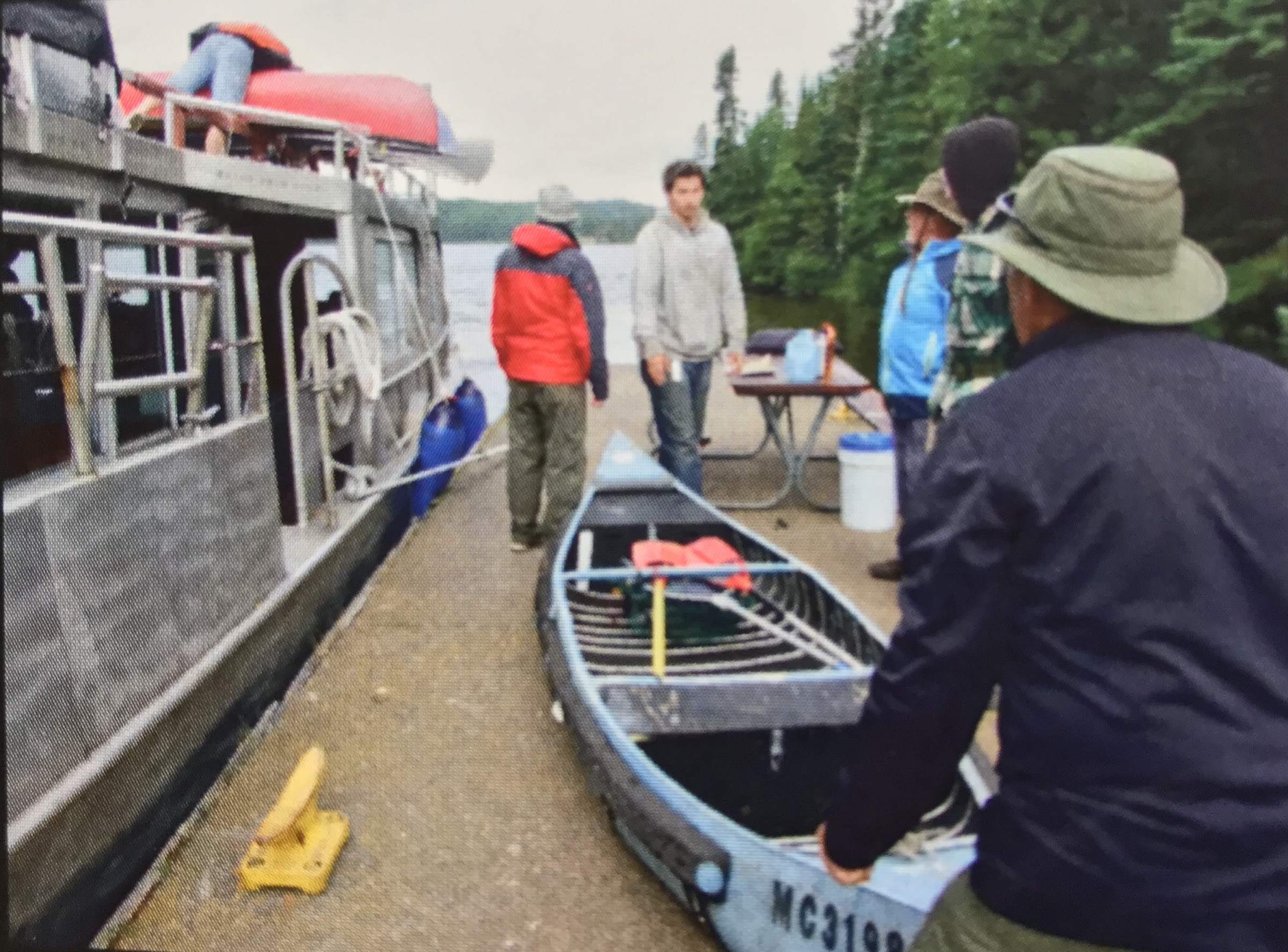 ...his pillow blew off the dock and into the water.

The trip back was rough, but that didn't stop Quinn from getting some "shut eye".

After arriving back at Grand Portage, Quinn, Tristin, and I jumped in a car and drove down to Minneapolis so Quinn could make his flight back home to Seattle. Then Tristin and I continued back home to Maryland.
Doug Jr. headed home and Steve and Doug Sr. drove down through Michigan and spent some time with some friends before returning to Maryland.
Top

BTW.... We are planning another trip for this year (2019)...end of July. Expect to see some familiar faces (Steve, Shawn, Doug Sr., possibly Quincey), and some new ones (my two nephews: Alex & Caleb, possibly my "brother" Sean, and maybe one or two of my daughters). We will have to split into two groups, but will most likely start at CH and branch out in different directions from there.
Top
Post Reply
29 posts