Got some trip suggestions at another National Park, or know of a great place in the middle of no where? Share them here, plan your trips, and hook up with other individuals on the forum.

All,
Well, after the first boat being cancelled, we decided to go back to Sylvania Wilderness and, guess what, the lakes are still ice covered! So, we are now on plan #3: we are going to paddle the Au Sable River from Roscommon to Lake Huron. I have eyed this river for years, but never been on it. If anyone has any insight on must sees, must stays, or tips in general, could you please share them here or in an email.

Mike, how was the trip? A buddy and I are trying to decide on this or the Current down in the Ozarks for an October paddle.
Top

Hate to interject, but the Current (or the Buffalo in NW Arkansas) can be mighty fine in October...
"Observe. Absorb. Create. Share."
Top

No need to worry about interjecting. I appreciate the input.

A fishing buddy who lives down there suggested the Current over the Buffalo at that time of year. He thought that the Buffalo would be too skinny and recommended the Current since it's got a more steady flow due to being spring fed.

I'm definitely leaning towards the Ozarks in October. I've never floated either one. Another fishing acquaintance splits time between Montana and southern MO, so we may have up to a 4 boat fleet if we head south.
Top

Finally got around to paddling the Au Sable last week 10/2 - 10/8. We put in at Grayling around 2 on Saturday afternoon and took out in Oscoda just after 5 on Friday for a total of 120 river miles.

Fishing was slow, but the weather put us behind right out of the gate and we were always chasing. It didn't allow for much time to really fish it like we should have.

Sites were: The Shuttle picked us up the next morning and off we went on the drive back to our vehicle in Grayling. We used Carlisle Canoe Livery in Grayling for a boat and shuttle. Janice and Paul were great to deal with and Paul was wonderful company on the hour and forty minute shuttle.

We saw lots of eagles, blue herons, ducks of all sorts, osprey, otters, beaver, trout, salmon below the last dam, great egrets, trumpeter swans, mute swans (based on the orange bill, but not sure), cormorants, geese, and hardly any people unless we were on the ponds.

There were moments I hated the trip, but those were mostly when we were paddling that barge into the headwind on the ponds. If I was going to do it again, I'd put in below Mio and spend 3 or 4 days paddling and fishing the Wild and Scenic portion of the river and take out somewhere on Alcona Dam Pond.

Grayling to Mio is "big home on the river" country and after a while, I got tired of all of them. After Alcona, you're basically paddling ponds that you're sharing with boats and I can do that here. 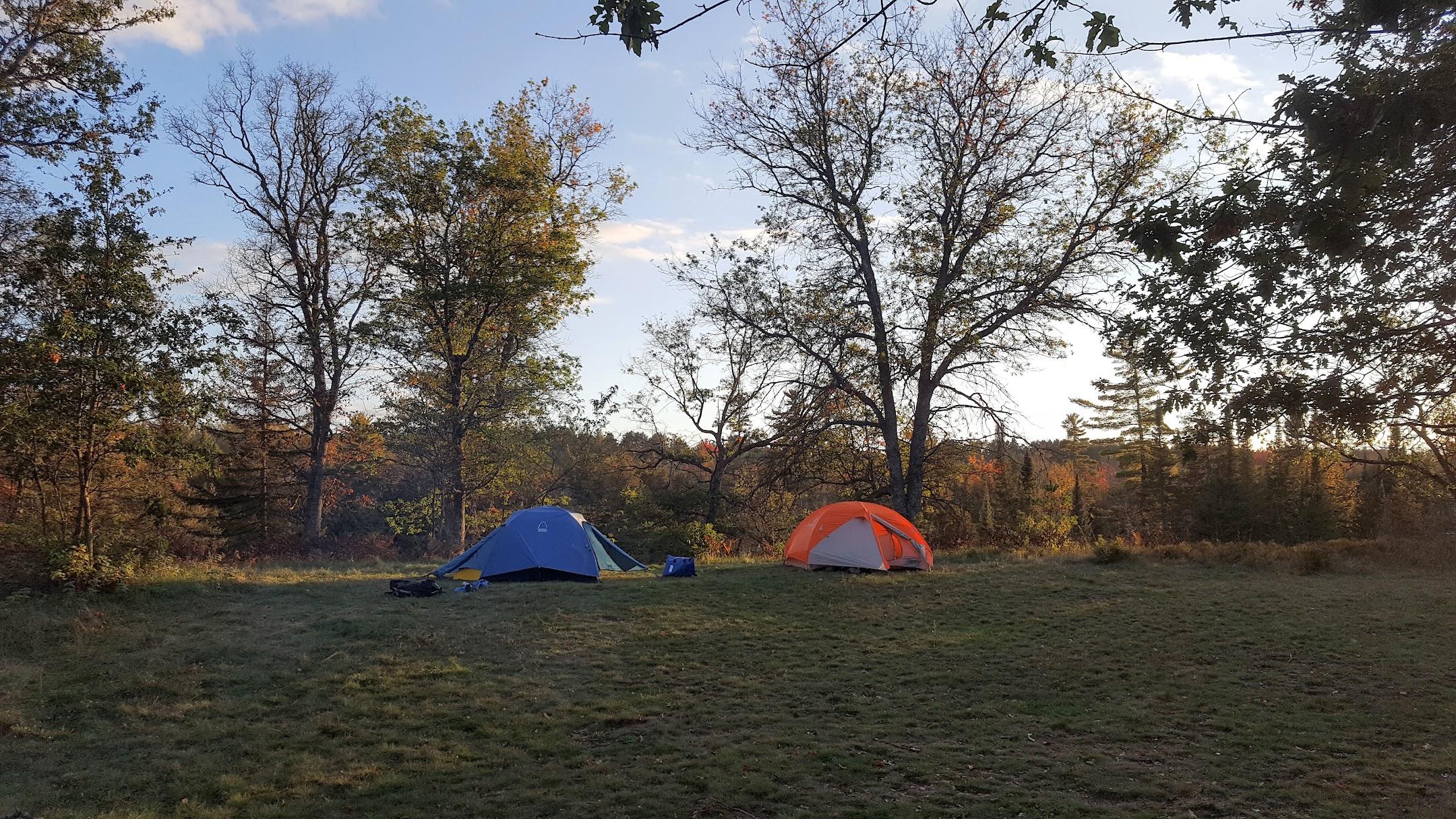 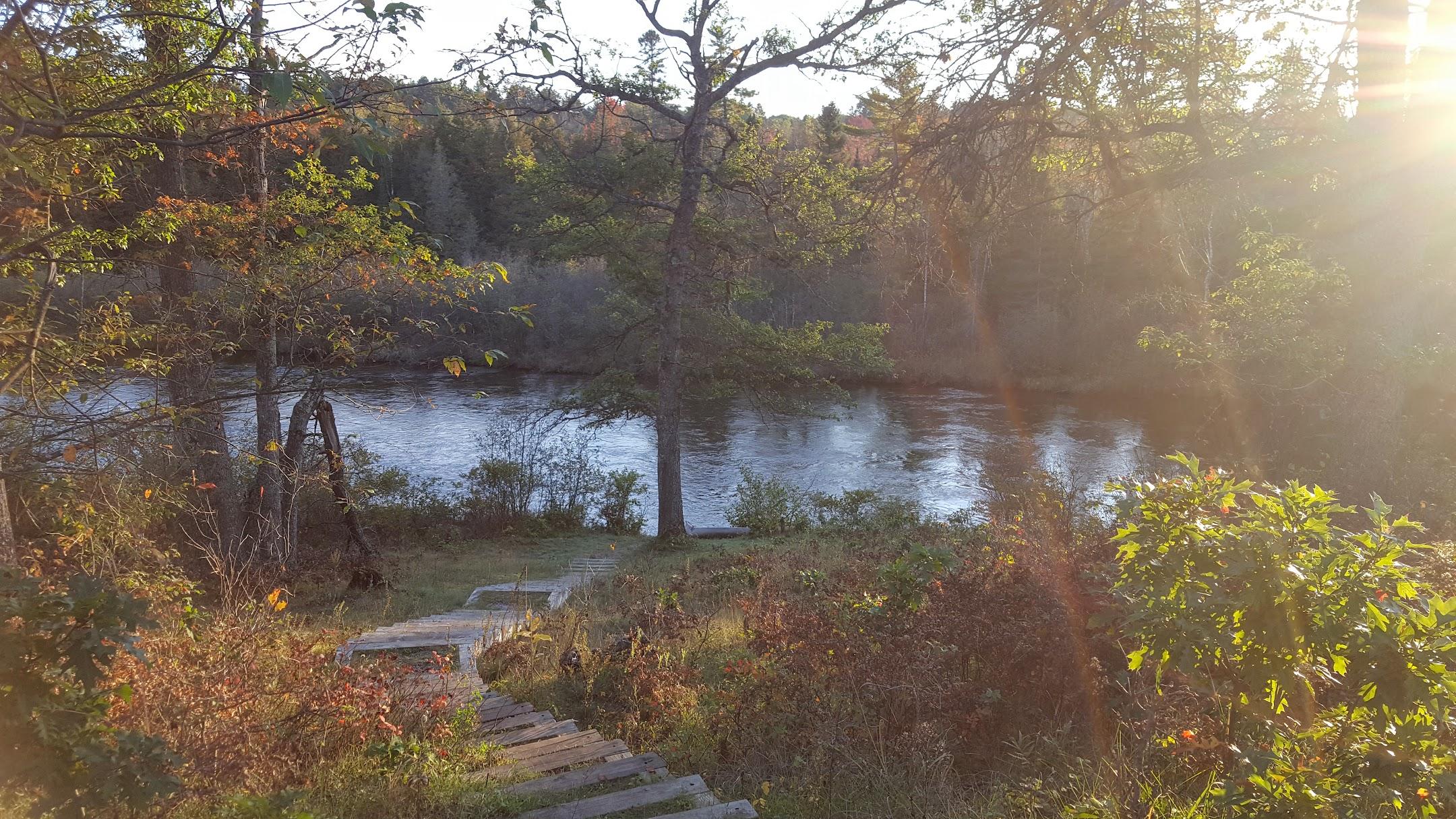 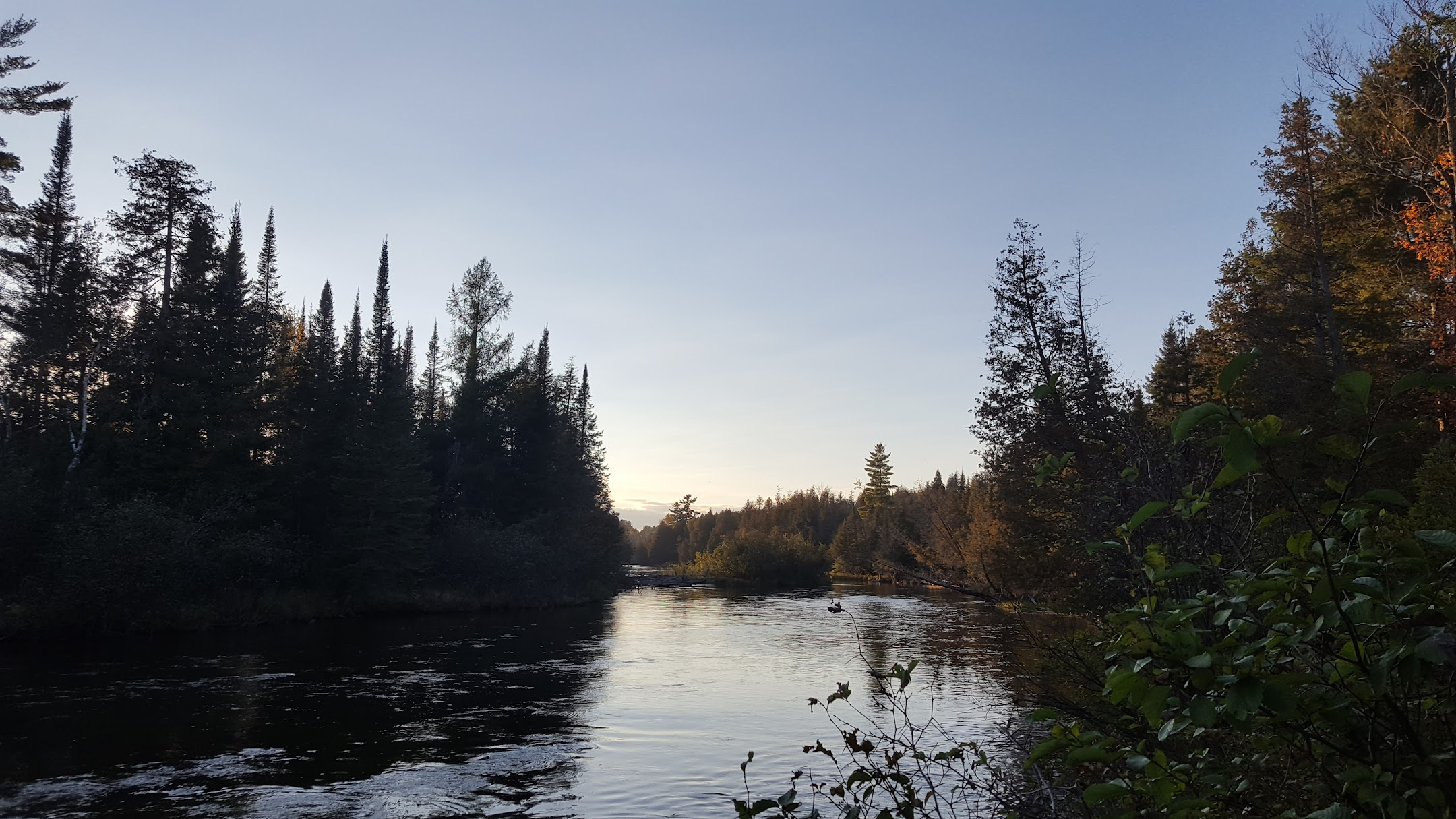 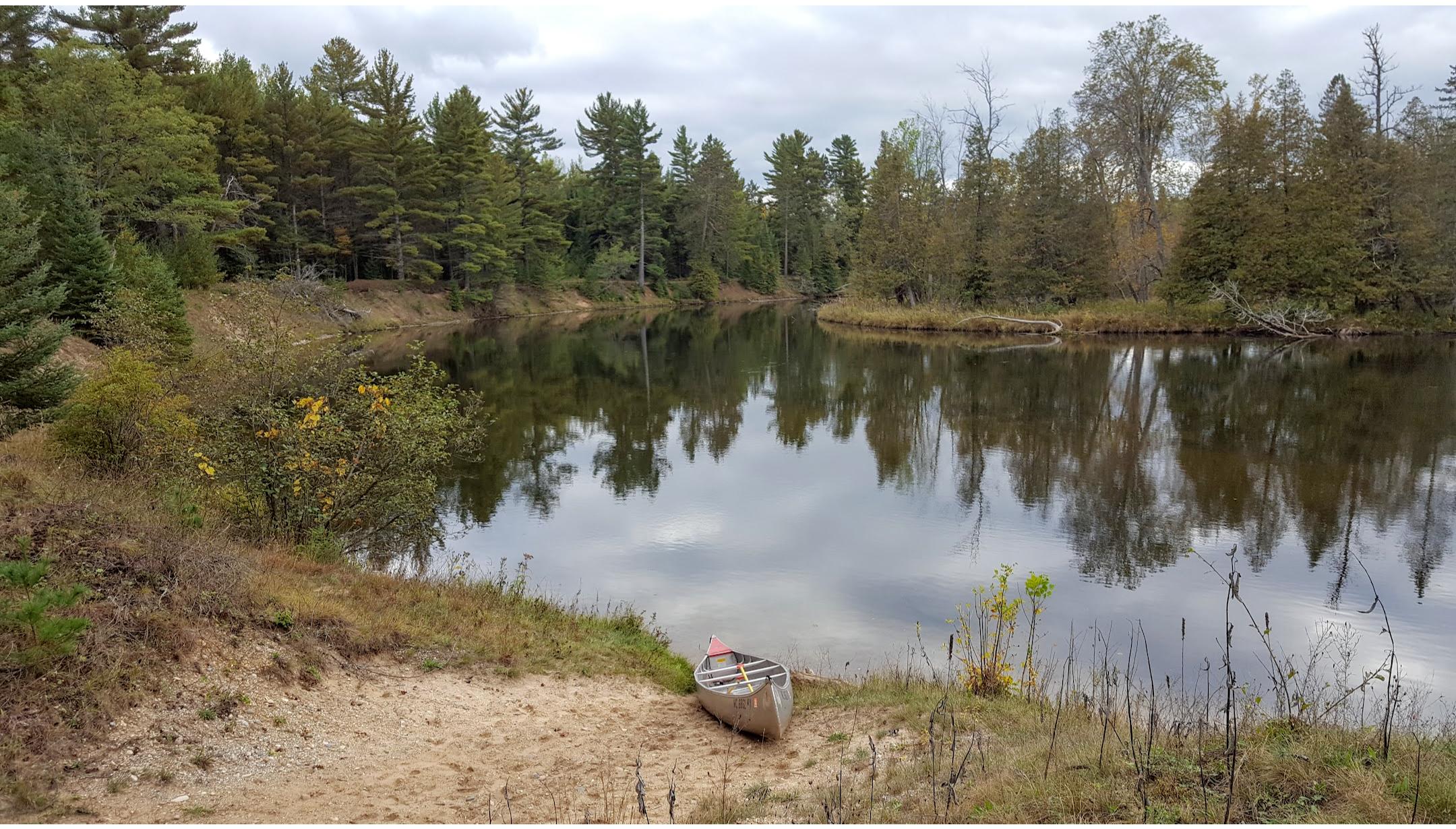 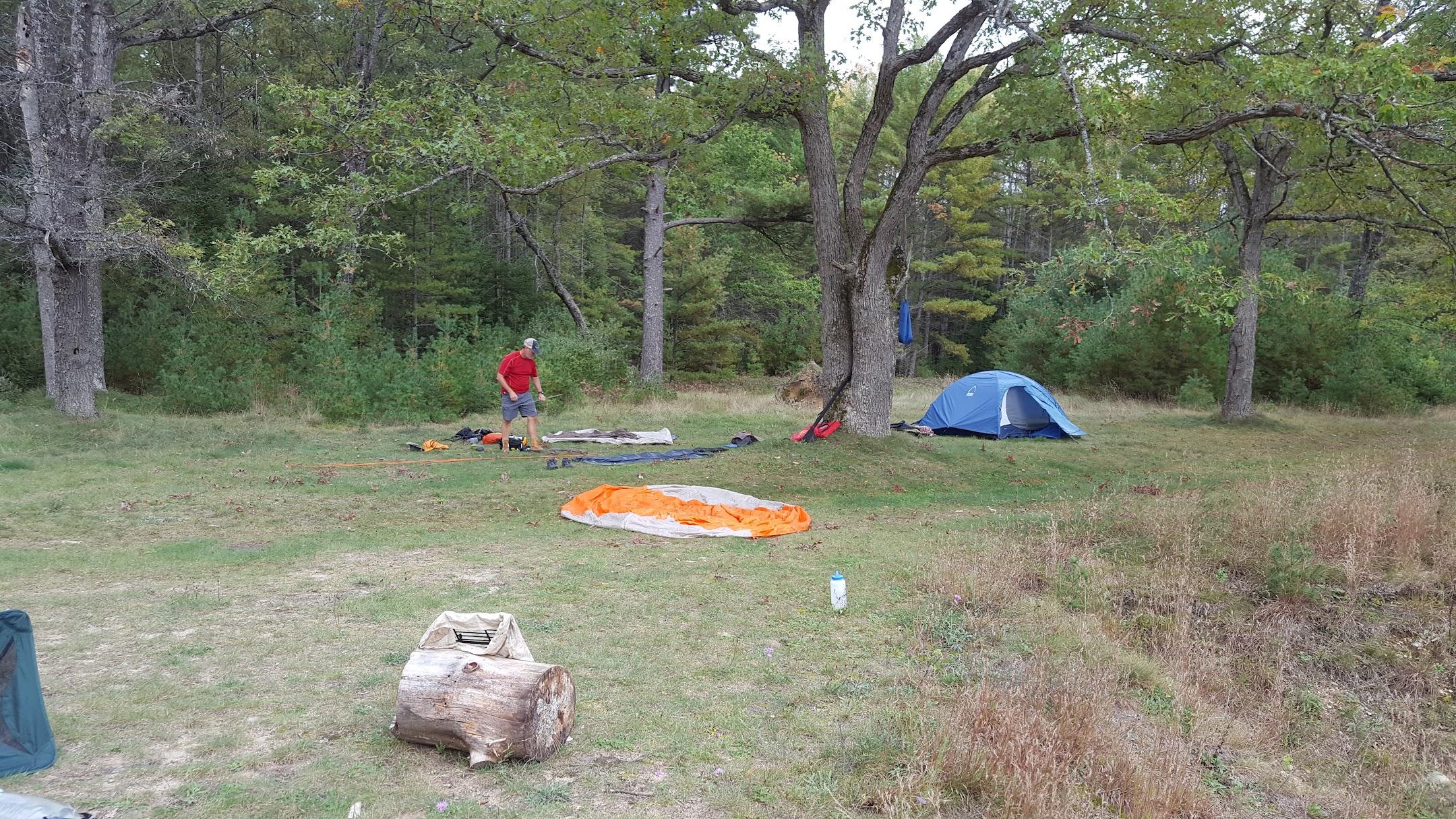 Return to “Other Places and Parks”