We call it "duck rock" but this name works too.
Rock of Ages Lighthouse Preservation Society (RoALPS) | Instagram
Top

We woke up fairly early and as I was meandering my way back to the shelter from the privy I hear the classic "splooshing" of a moose in the creek. I wander towards that spot on Washington creek near the privy (not a tent site) but right on the water with a picnic table and sure enough I spot him down the creek.

Can you spot the moose? 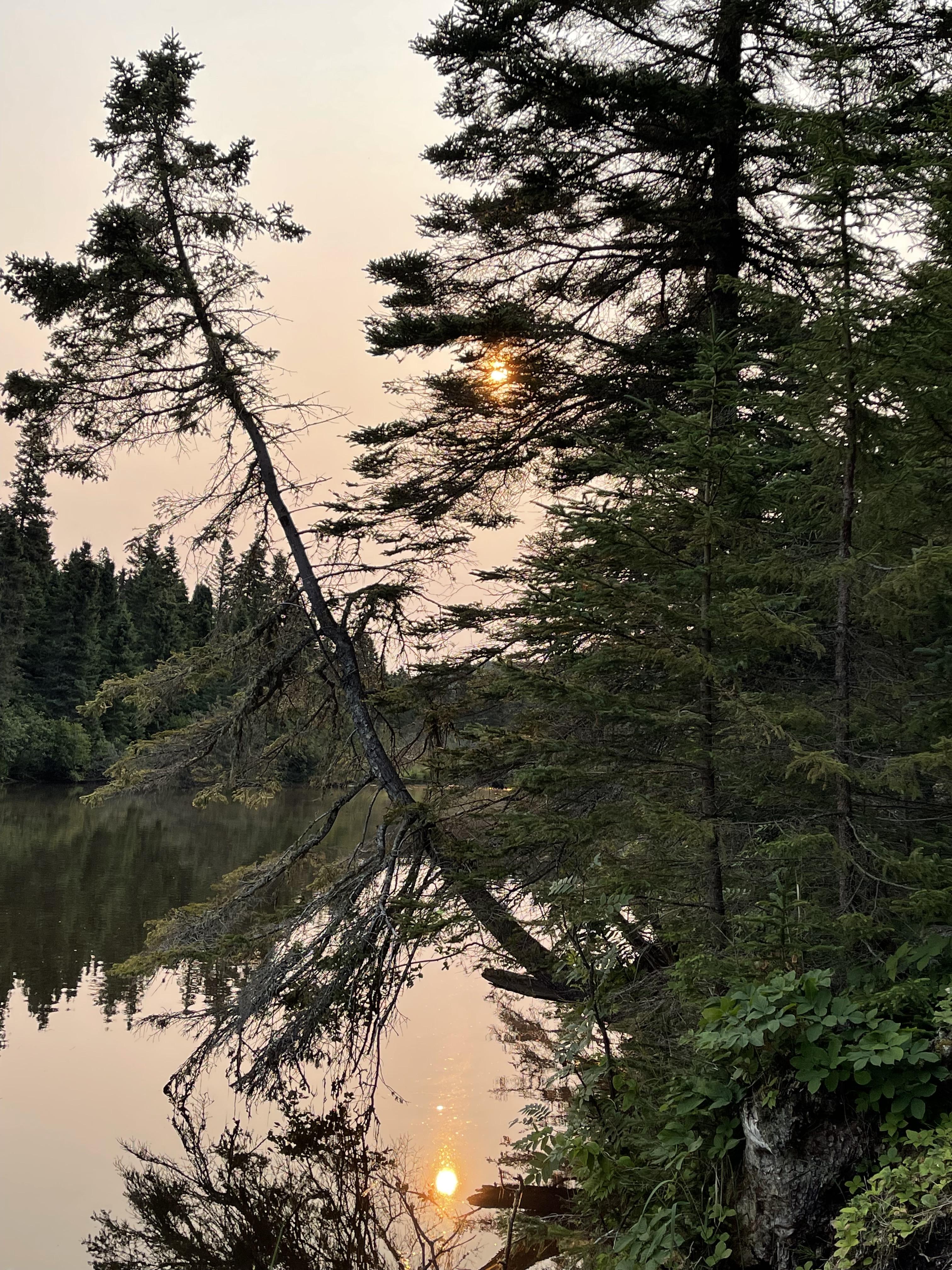 Matt eventually met up with me and we watched him for quite a while. This was our second moose of the trip! 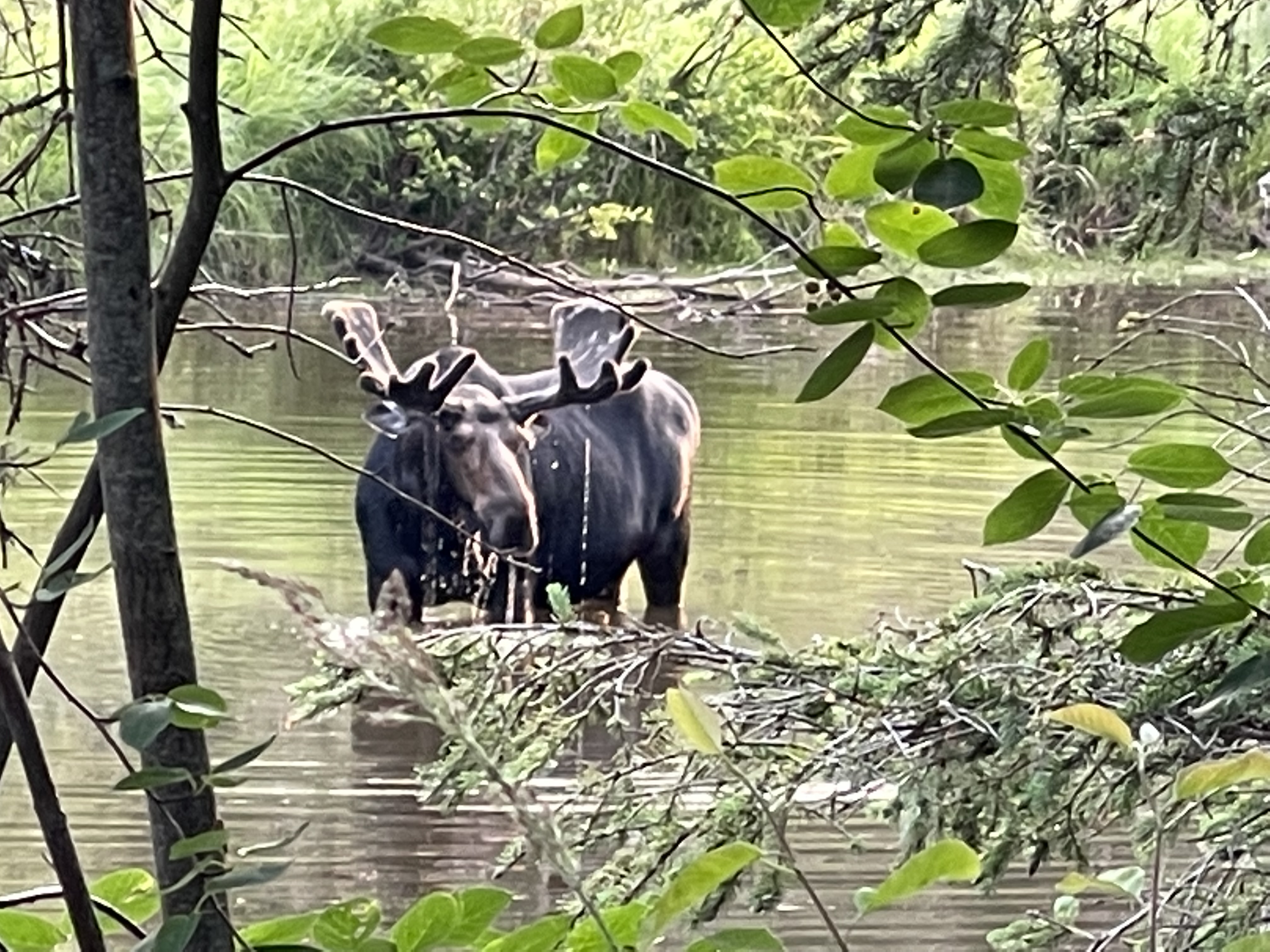 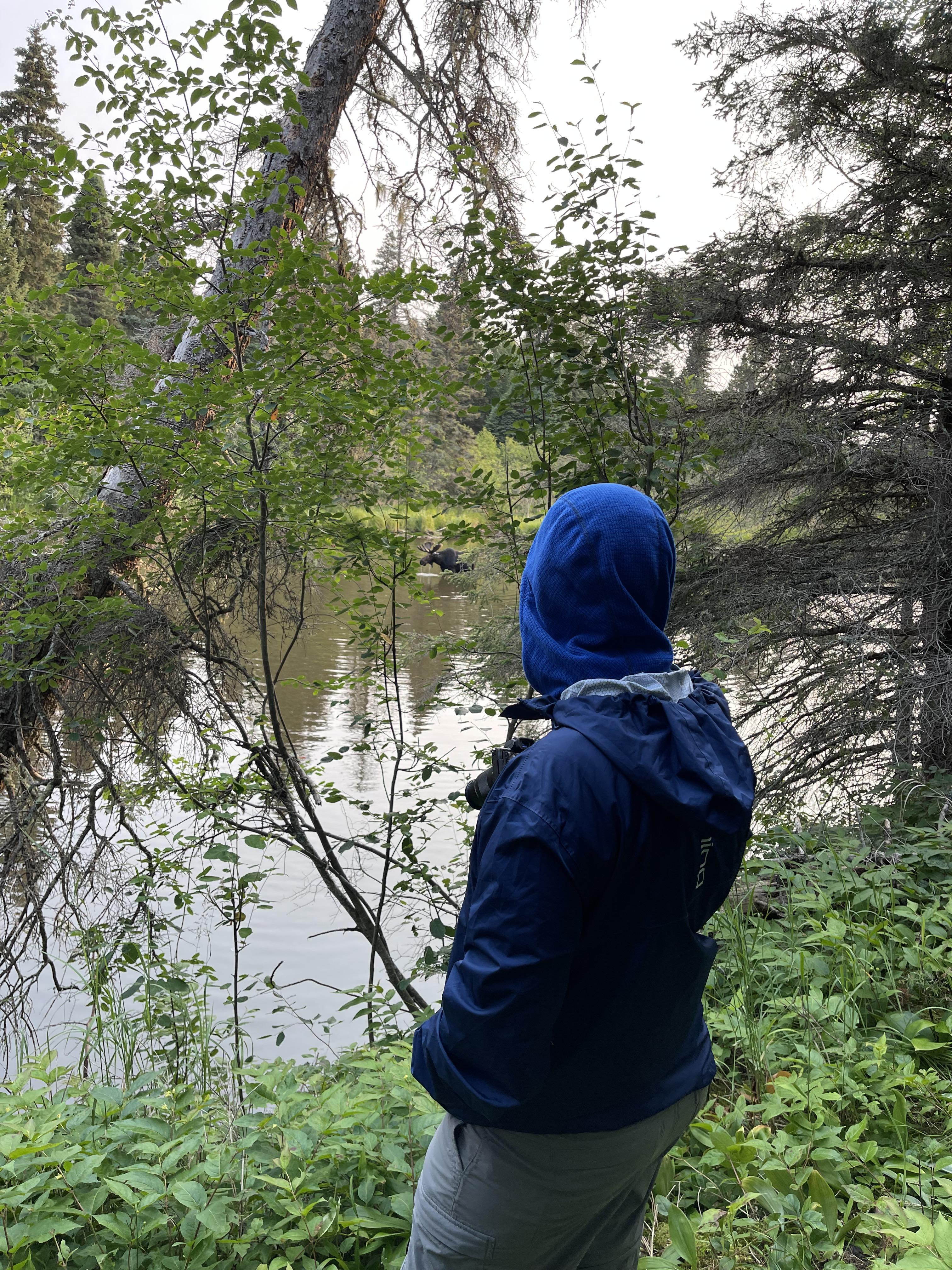 We knew we would eventually see one in Washington creek. The day before had been so loud in camp we knew it would be tough to see one. If you ever stay here, be mindful of slamming doors and yelling voices. Your chances of a moose go way down when that is going on.

We headed back to camp and made a hot cup of coffee. Then I cooked up some oatmeal for myself and Matt shook up a "Berry Berry" Jump start smoothie. As we watched a pair of pilated woodpeckers drill up a dead tree across the creek, we made plans to do something new to us on the island. We had spotted the canoe rack the day before, and being lovers of a good ol grumman canoe we just had to rent one out for the day. 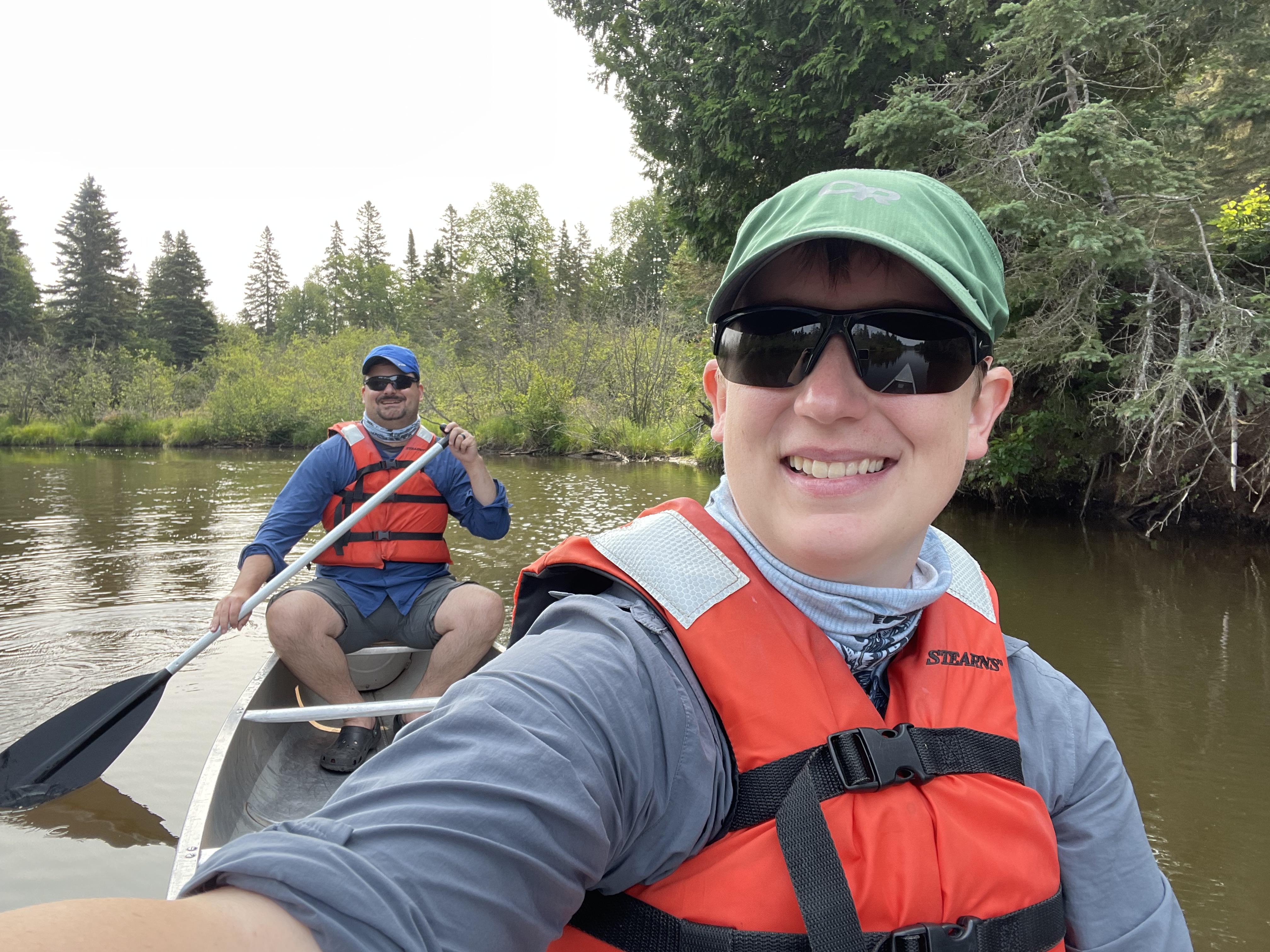 Our camp view from the water 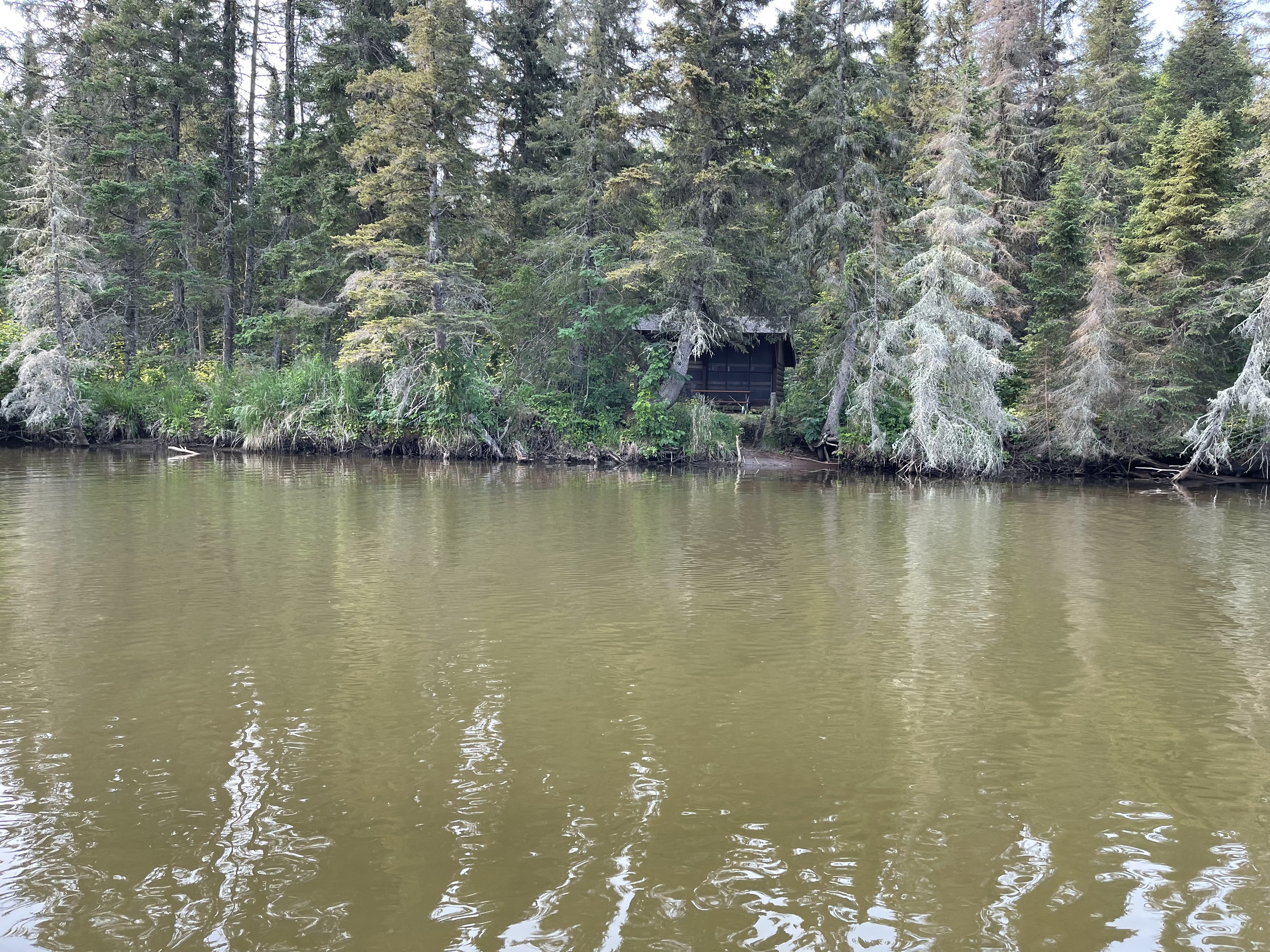 A look at the new windigo store from the harbor 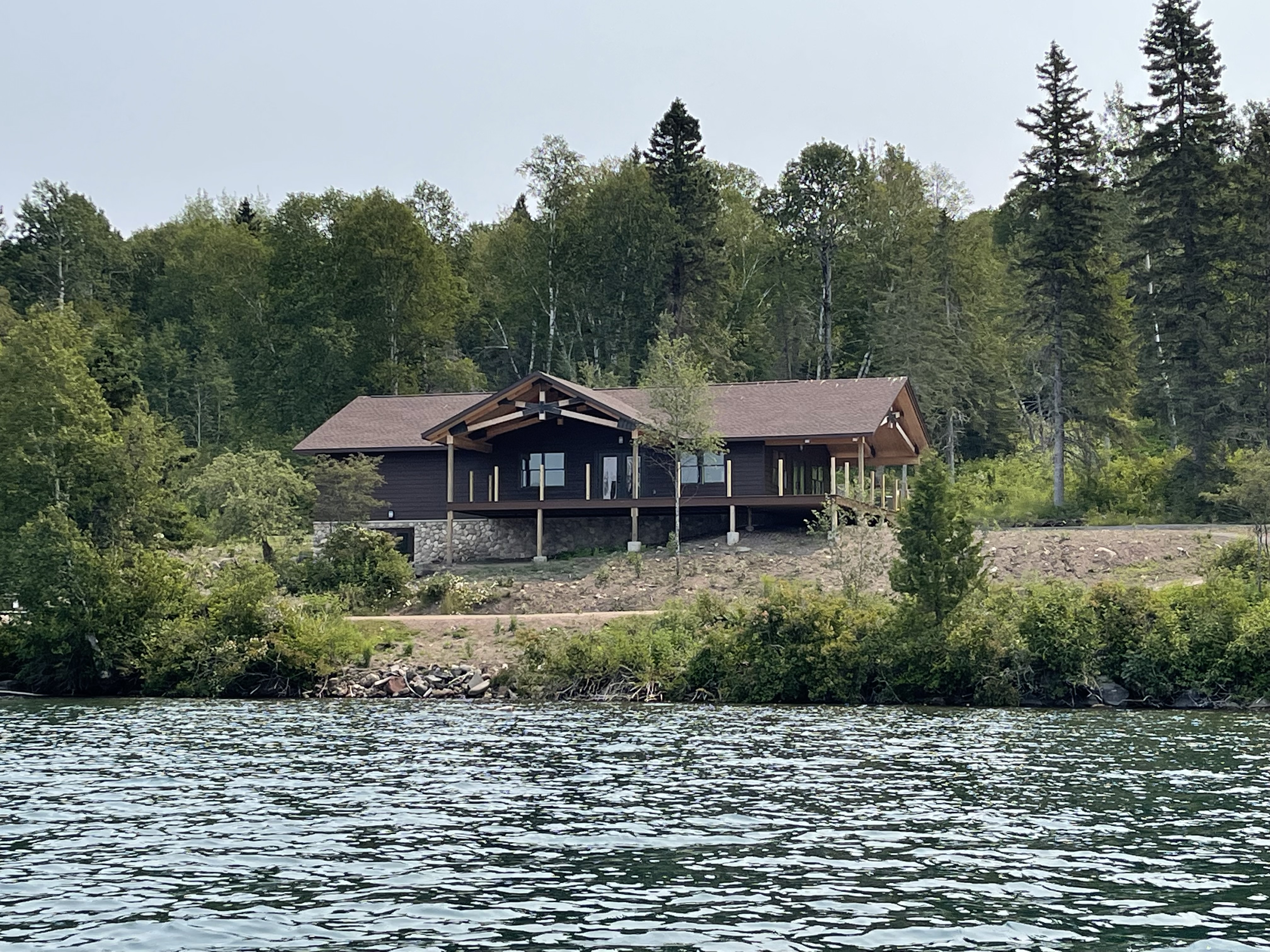 We spent the next four hours paddling up the creek, out to beaver island, and around the harbor. The boat traffic made our paddle to beaver island a little more sporty than we'd like at one point, but we sure had a good time. At one point we took a break by docking up at our campsite and enjoying a little lunch of cheese, jerky, gardettos, and corn nuts. We really could not have asked for a prettier day on the water. It was so much fun to paddle once the boat traffic died down. We ended mid afternoon with another moose spotting in the creek. A mid day moose ! This makes 3 for the trip.

We had a pizza margarita tortilla dinner and read our books while sitting by creak for the rest of the afternoon. The mosquitos had arrived and decided they like the spot by the creek as well. So we retreated to the bug free inside of the shelter...I will always bring the collapsible chairs we have for this purpose!! Great for shelter sitting. Then we hear it again .. the splooshing of another moose! This bull had a much smaller rack than the earlier moose that day, but certainly didnt lack in body size. We filmed the moose and chatted outside with our neighbor Judy for at least an hour. Finally the mosquitos got too bad and we retreated, once again to the shelter.

After another hour of laying around -- well past hiker midnight, our moose friend had not left! He was splashing and snorting and getting very close to the shelter. He was having a grand ol time out there. 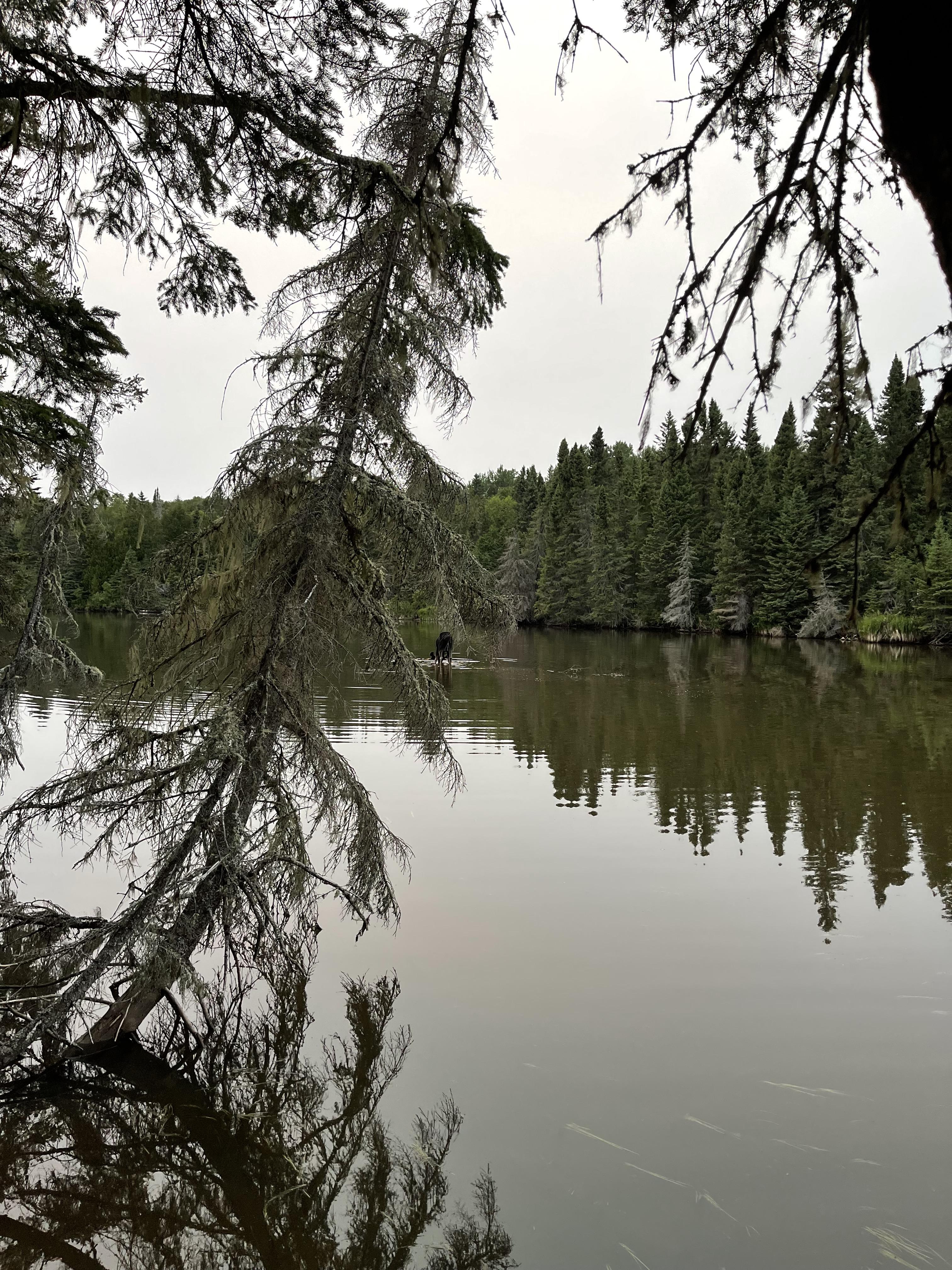 After what was probably over an hour of mooose footage filmed, we decided to finally get some sleep and snuggled in for one last night on the island.

This whole trip report has been wonderful, but I'm especially excited to see your notes about your paddling. Was the paddle out to Beaver Island worth dealing with the boat traffic? A couple months I asked a question about this elsewhere on the forum because I'm planning to rent a kayak for a half day paddle at the end of my trip but am worried both about encountering moose in Washington Creek and boats in Washington Harbor. I don't think I'm going to have the energy at that point in my trip to paddle for the full four hours of the rental, so if you had to choose only one would you go Harbor or Creek?
Top

alicecw wrote: ↑Sun Jan 09, 2022 5:02 pm This whole trip report has been wonderful, but I'm especially excited to see your notes about your paddling. Was the paddle out to Beaver Island worth dealing with the boat traffic? A couple months I asked a question about this elsewhere on the forum because I'm planning to rent a kayak for a half day paddle at the end of my trip but am worried both about encountering moose in Washington Creek and boats in Washington Harbor. I don't think I'm going to have the energy at that point in my trip to paddle for the full four hours of the rental, so if you had to choose only one would you go Harbor or Creek?

We really liked getting to beaver island's coast. We didn't actually get to the campground because of its location in the seaplane and boat path. Unfortunately it was a Saturday and so that area was busier than normal (visitors on private boats, fishing boats, the sea hunter and the voyager). We explored the north side of the island and around the point near windigo, all of which was beautiful. The clear water was gorgeous. I loved seeing the submerged rocks and logs and wished I had brought fishing gear.

As for the moose in Washington creek, we didn't have that issue when we were canoeing but we just took it slow and kept a good lookout. If you spot one in the distance just keep your distance. Worst case you could beach your yak along the coast of the campground and portage out to avoid a moose. The creek narrows and floatable water ended fairly quickly for us so dont plan on that taking a lot of time (was a very dry year though).

The harbor itself north and north west of windigo is amazingly beautiful as well.

Definitely recommend renting the canoes or the kayaks for anyone reading this. It was so worth it just to see the island from a different perspective.
Trip1East side loop: https://youtu.be/xejNOfYWpIQ
Trip2 Minong End to End : https://www.youtube.com/playlist?list=P ... 9ZJVgtfgga
Trip3 Feltdmann loop : https://youtube.com/playlist?list=PLaiL ... 5Tc4NyvOCO
Husband_Wife_OutdoorLife on Youtube https://www.youtube.com/c/HusbandWifeOutdoorLife
Top

Day 7: Last morning on the island

We woke up early by alarm (gosh I hate setting alarms on the island) so we wouldn't miss our flight out. After hitting the snooze at least once, maybe twice, I rolled out of bed to look for moose while Matt headed up to use the "luxery bathrooms". haha. There ended up being moose #5 in the creek a few sites down from us and I got to watch him for a while before heading back to the shelter to start packing up. Gosh I hate packing up to leave!! It's way more fun to pack up to hit the trail. 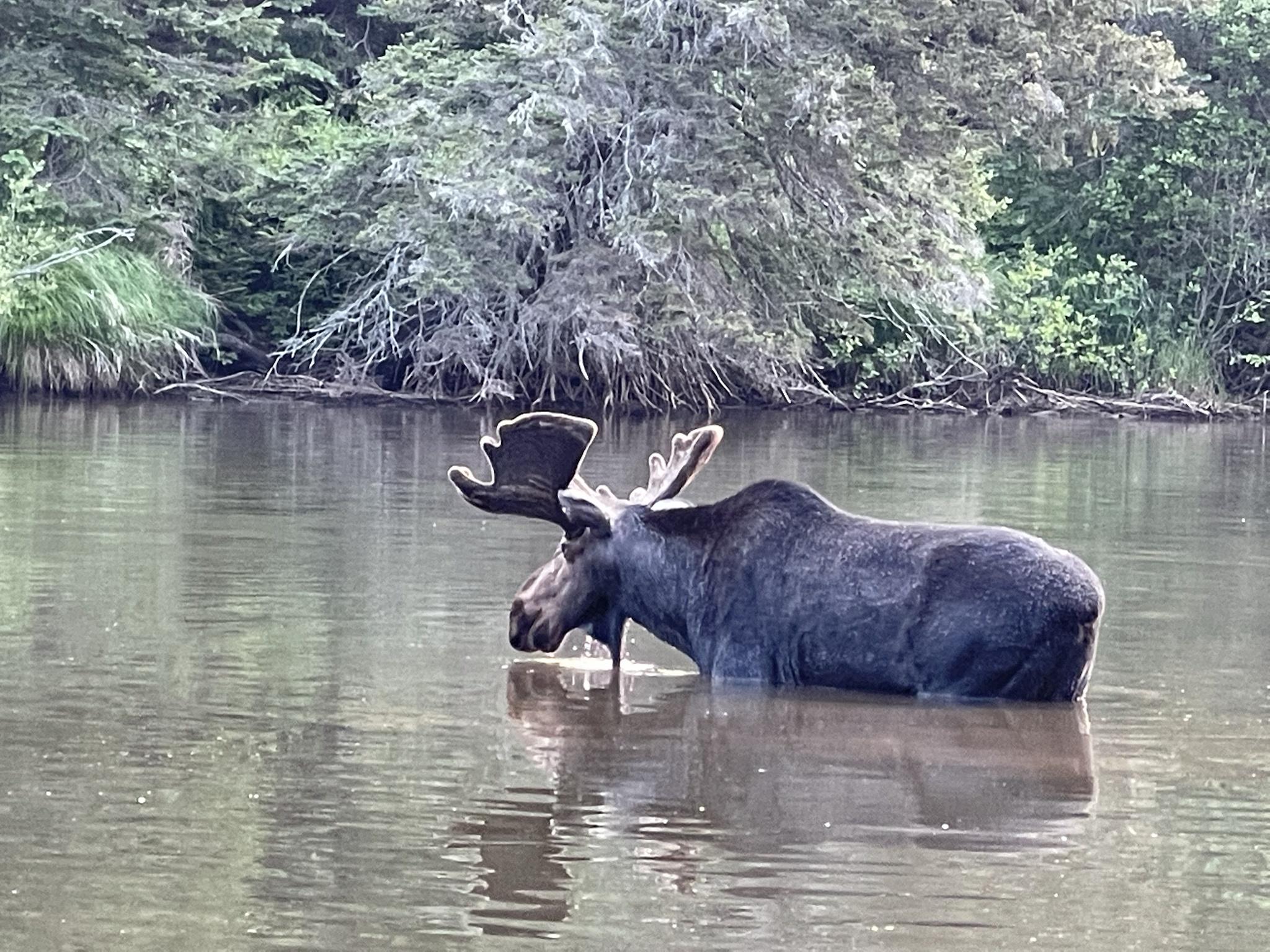 Matt made us a little breakfast while I finished packing up our quilts and sleeping pads. I had a bagel with peanut butter and jam with a back country "iced" coffee (see video for recipe) and Matt had plain oatmeal. While we ate moose #5 got closer to our shelter and a friend had joined him, moose #6. By the end of breakfast we were calling them Melvin and Mervin. They stuck around our campsite for the duration of the morning. They ended up getting so close at one point we both retreated to in the shelter. I have so much footage of Melvin and Mervin !! It was quite the treat to have them see us off. We finally said goodbye to the moose filled creek and our shelter and headed up towards windigo for our flight out. 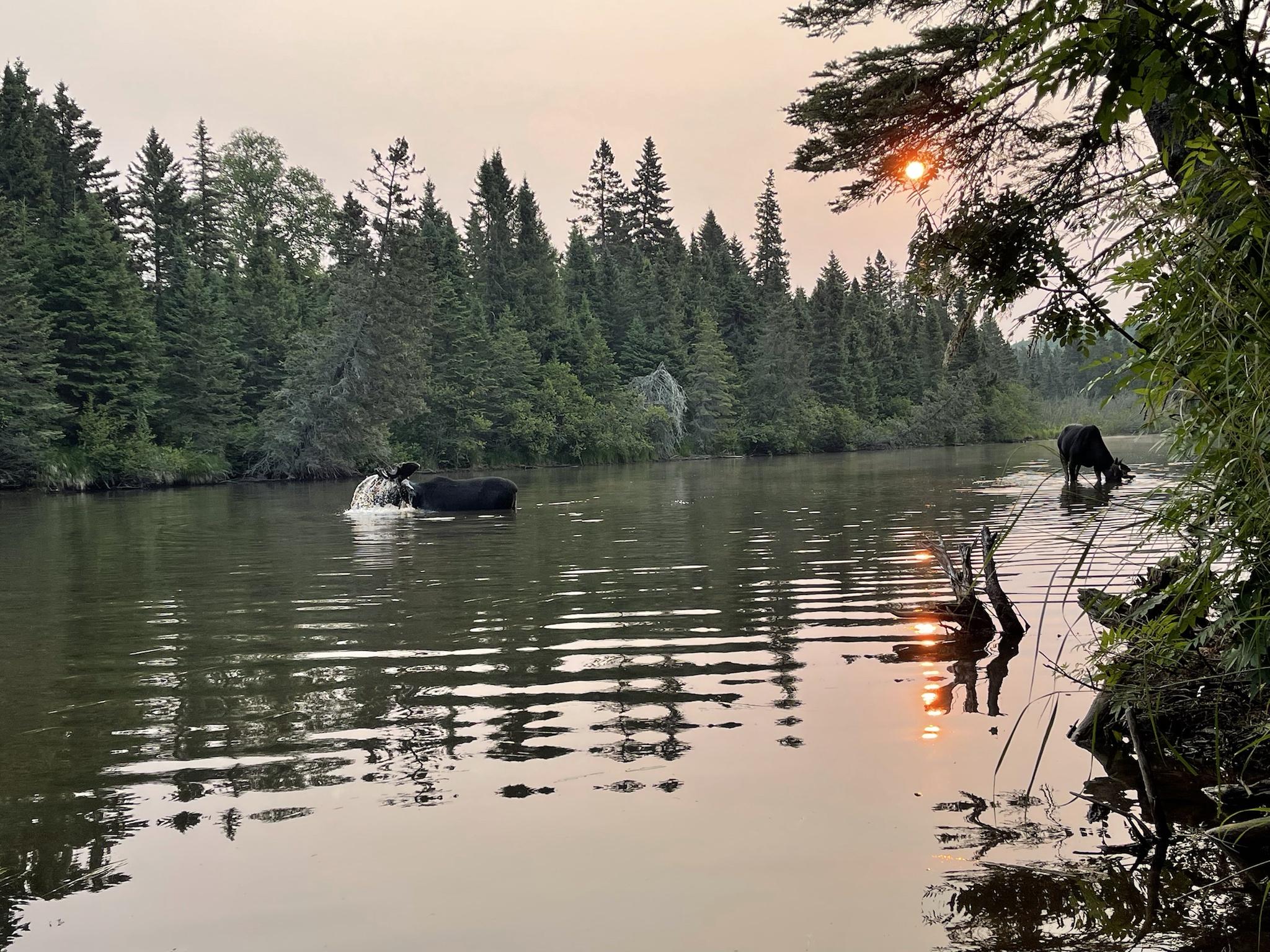 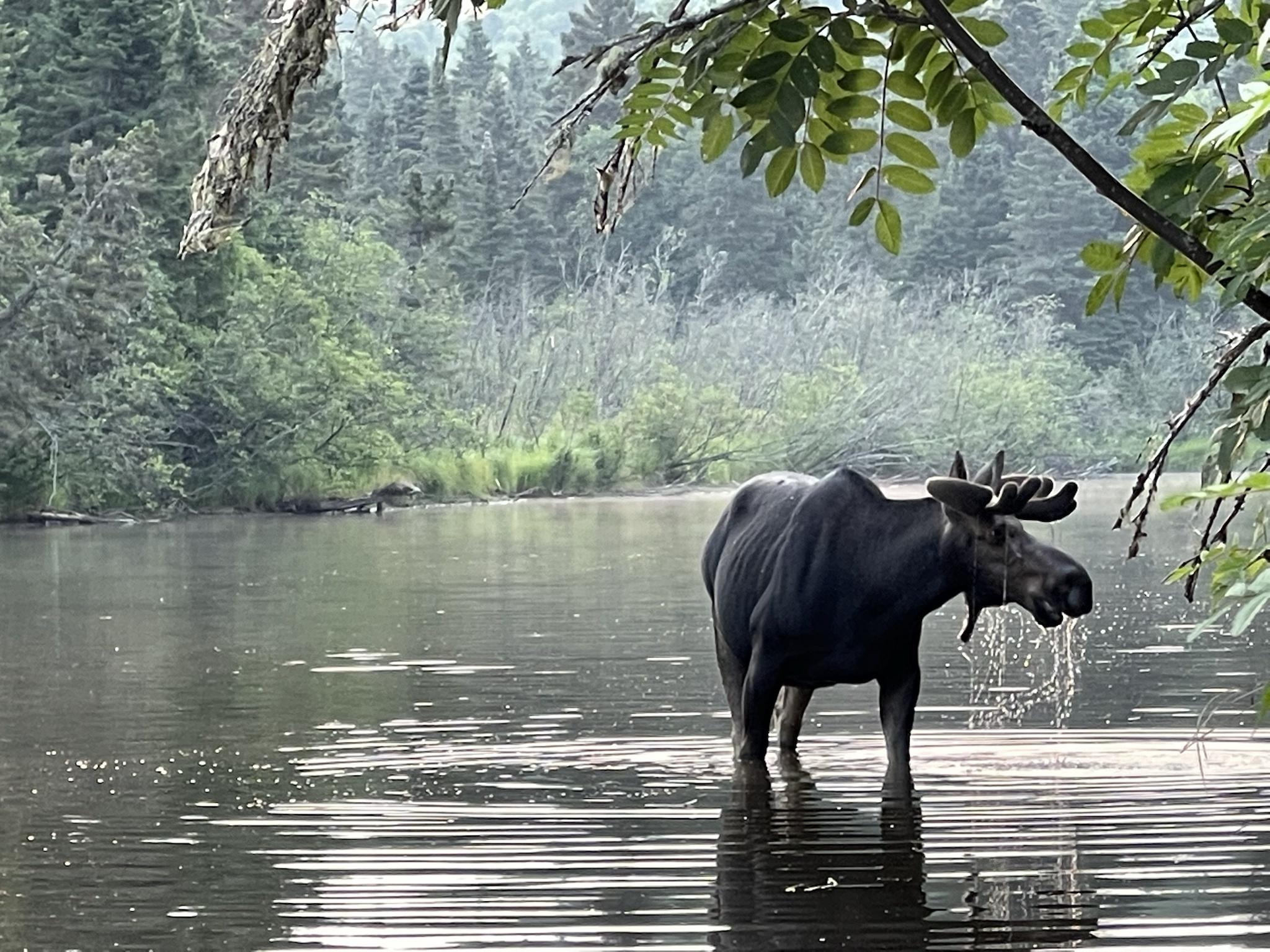 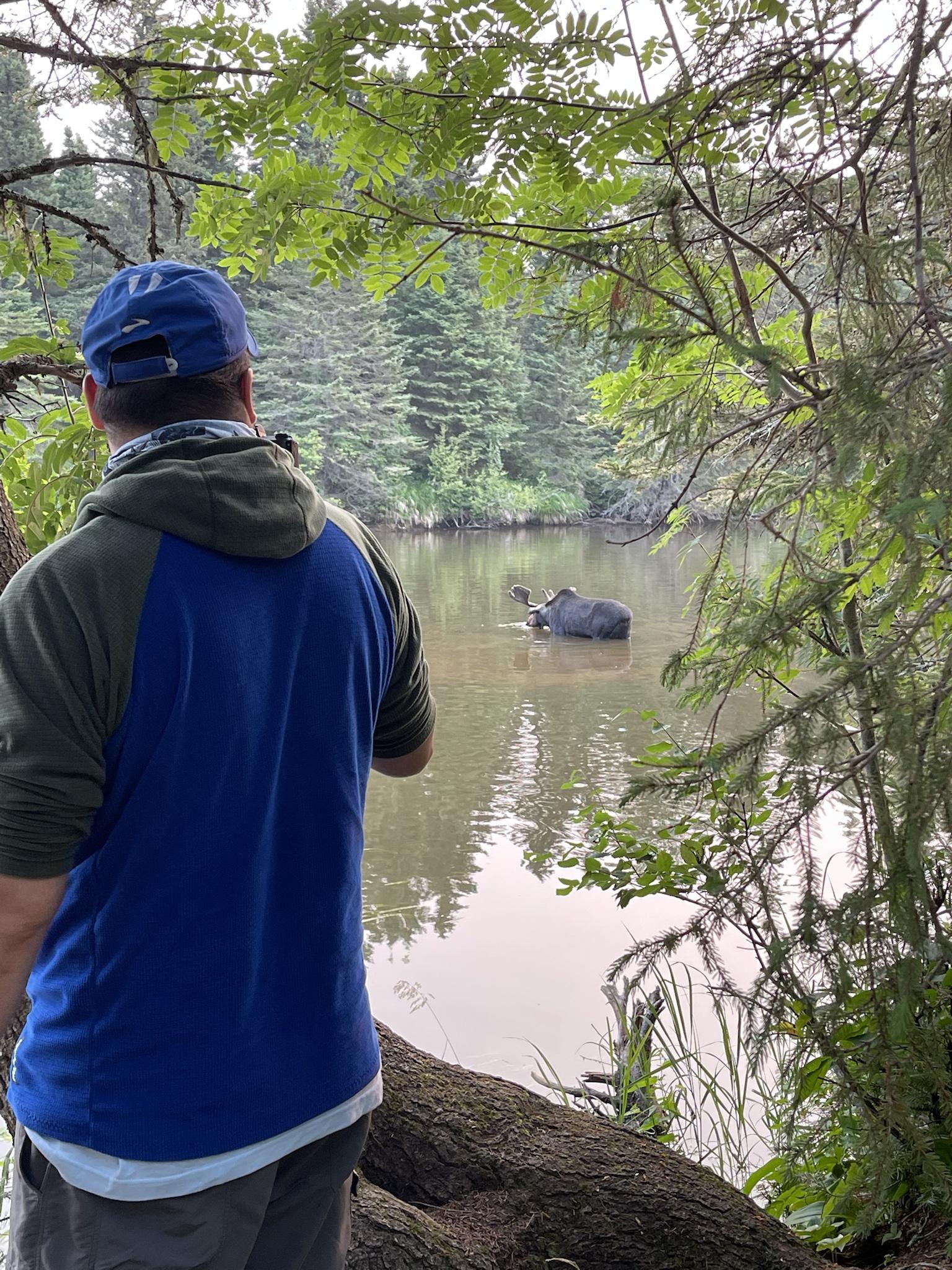 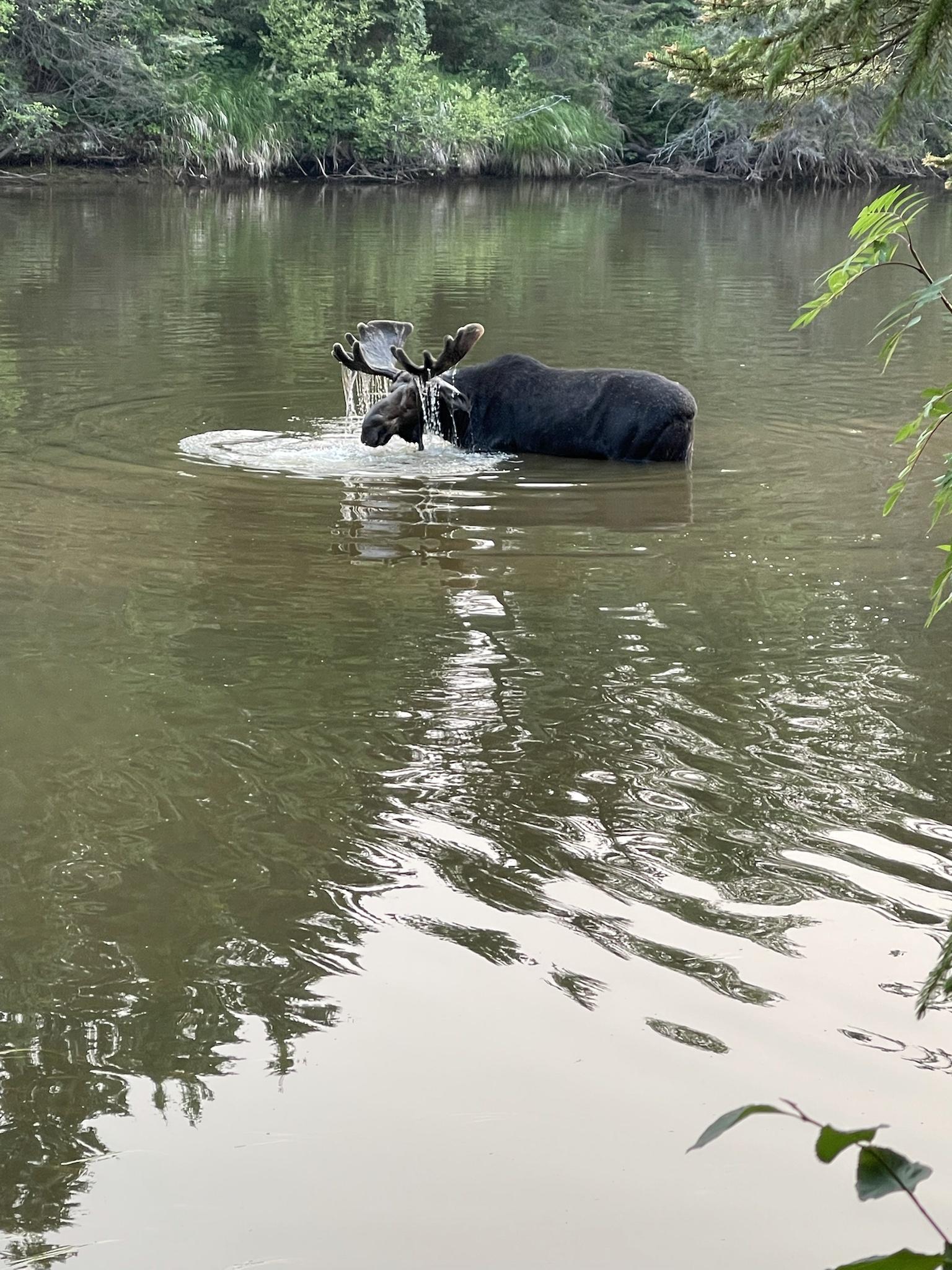 As we approached "poop rock" we spotted another bull in the water. This big guy was magnificent. We watched him for less than a minute and continued our walk up to windigo. Unfortunately a sailboat launched their small dinghy and were motoring fast towards to the moose. The two boaters were trying to get close enough to take some photos with their phone, but I dont think they realized they were chasing down a now very agitated moose. The moose charged towards the shore coming right at us. It happened so fast. He splashed towards the bank as we made a quick getaway. They must not have realized what they did as they continued to motor towards him, spooking him onto the walkway and into the woods. I am sure in their photos they got us in the background fleeing the scene. I wish people understood giving moose some distance a little better.

We continued our walk up and found that no one was really around. Left our fuel can on a stack of a bunch of other cans with a note to use it up. We took our pics by the sign and ended our "hike" right where it started near the feldtmann lake turn off. We were pretty early for the flight so we sat and watched the sun continue to rise and eventually heard the familiar sound of a plane coming in. After just a few minutes the dock was bustling as two other hikers joined our que and the plane landed with a load of hikers to be dropped off. We shared a few stories with the other hikers and eventually donned our masks, life vests, and earplugs for the ride home. The flight was smooth as butter. We really do love the seaplanes for island travel. We landed in what seemed like no time. My phone buzzed with messages from work and emails galore. And yes the car doors were locked 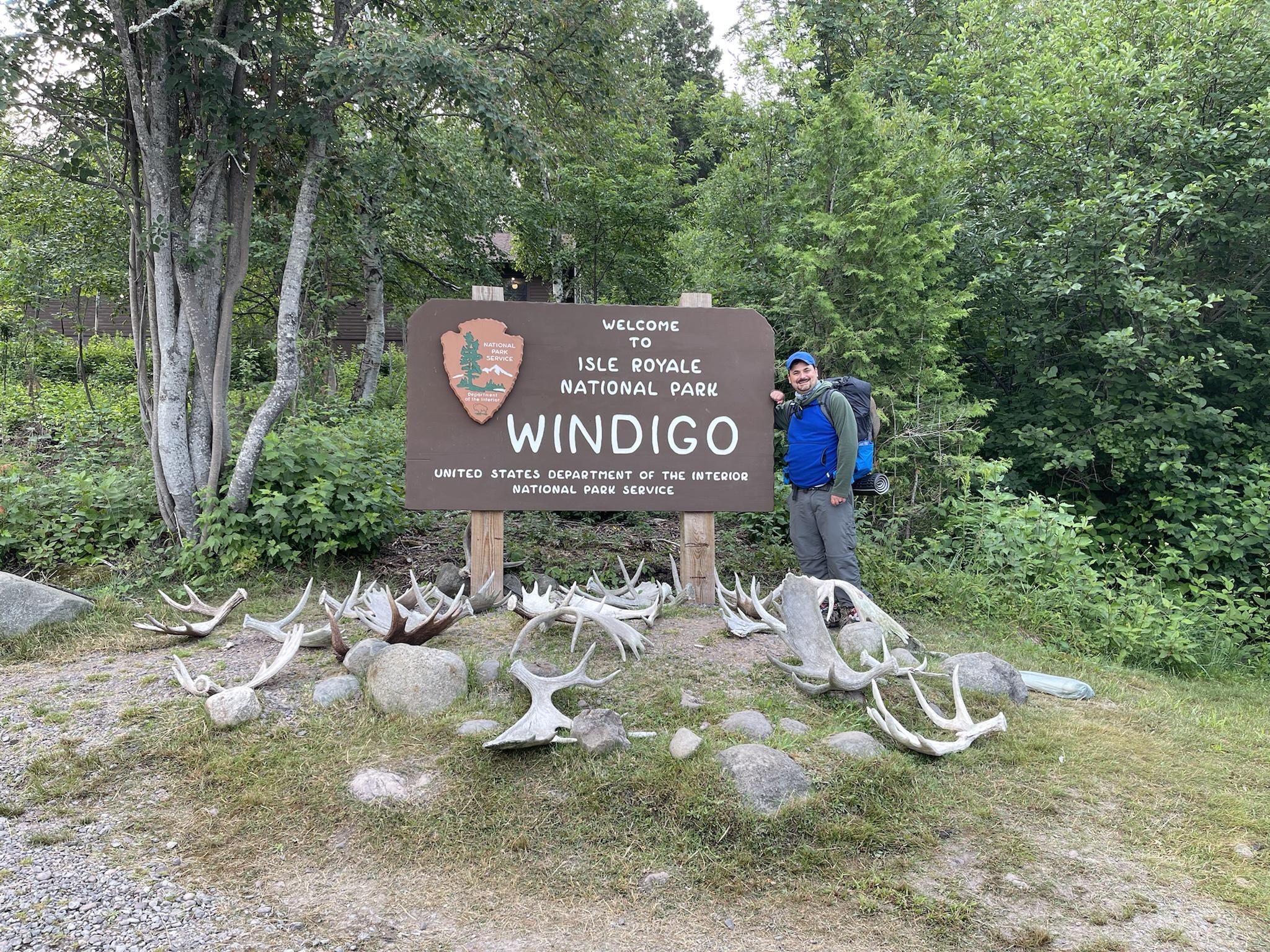 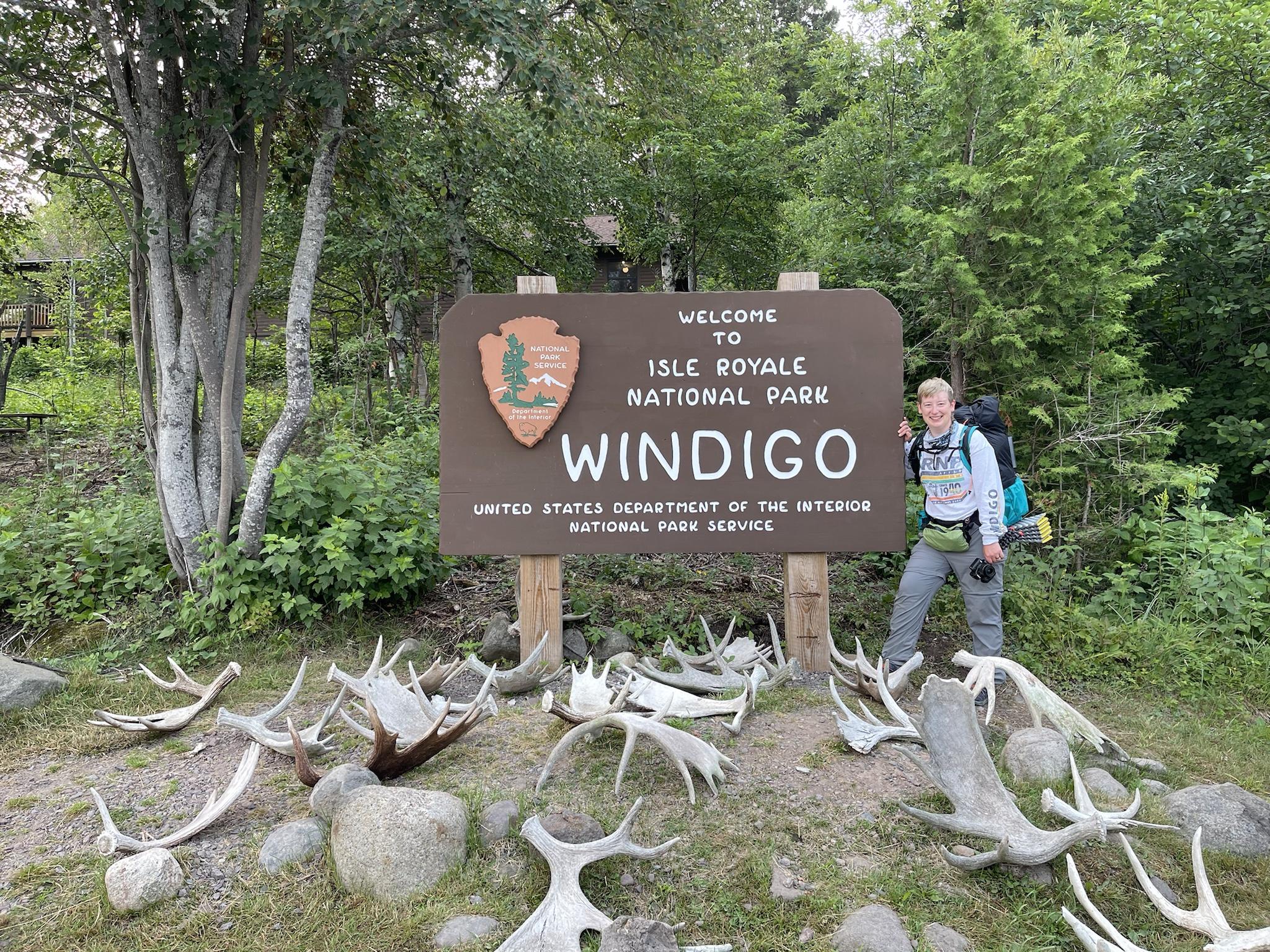 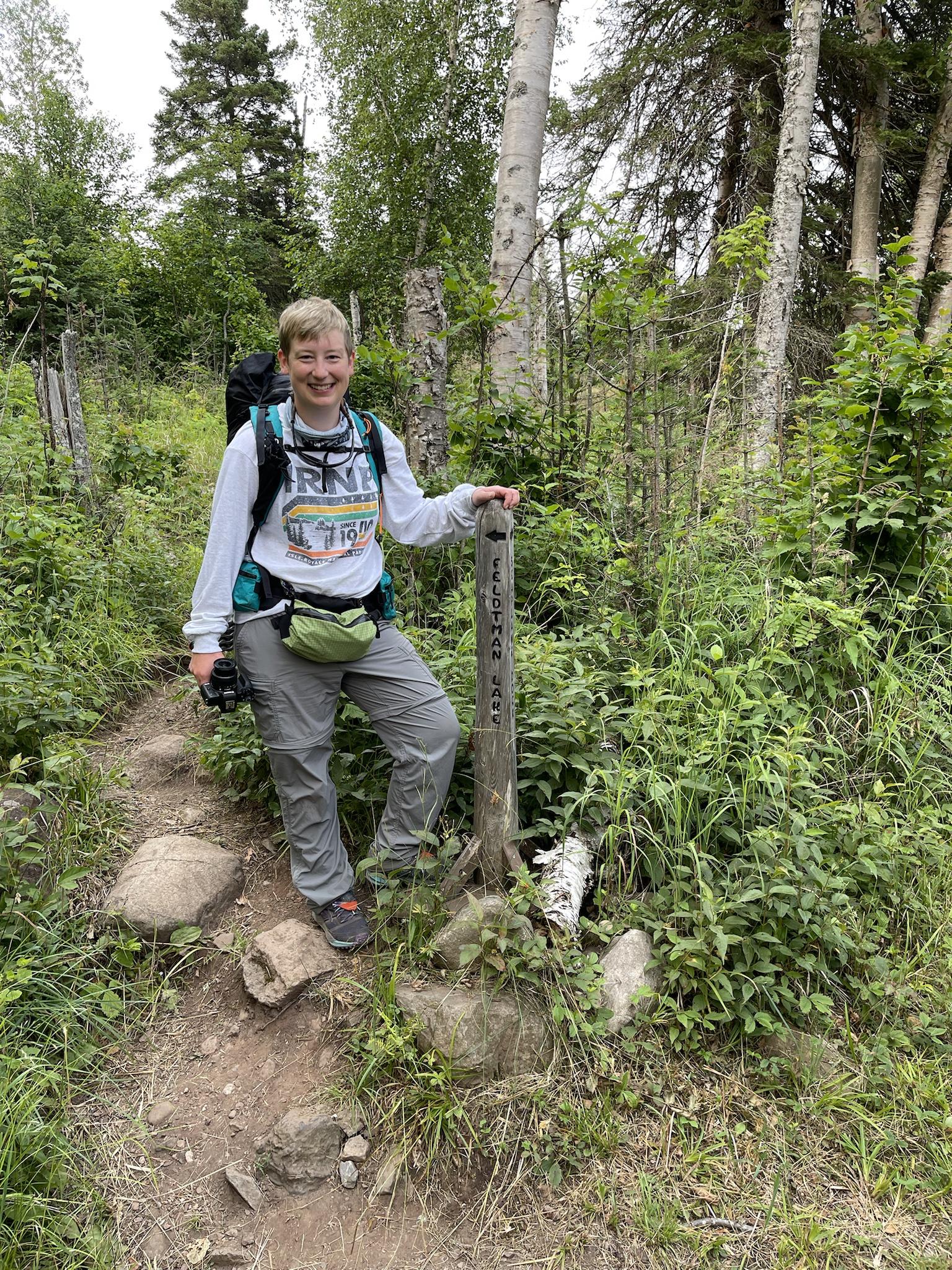 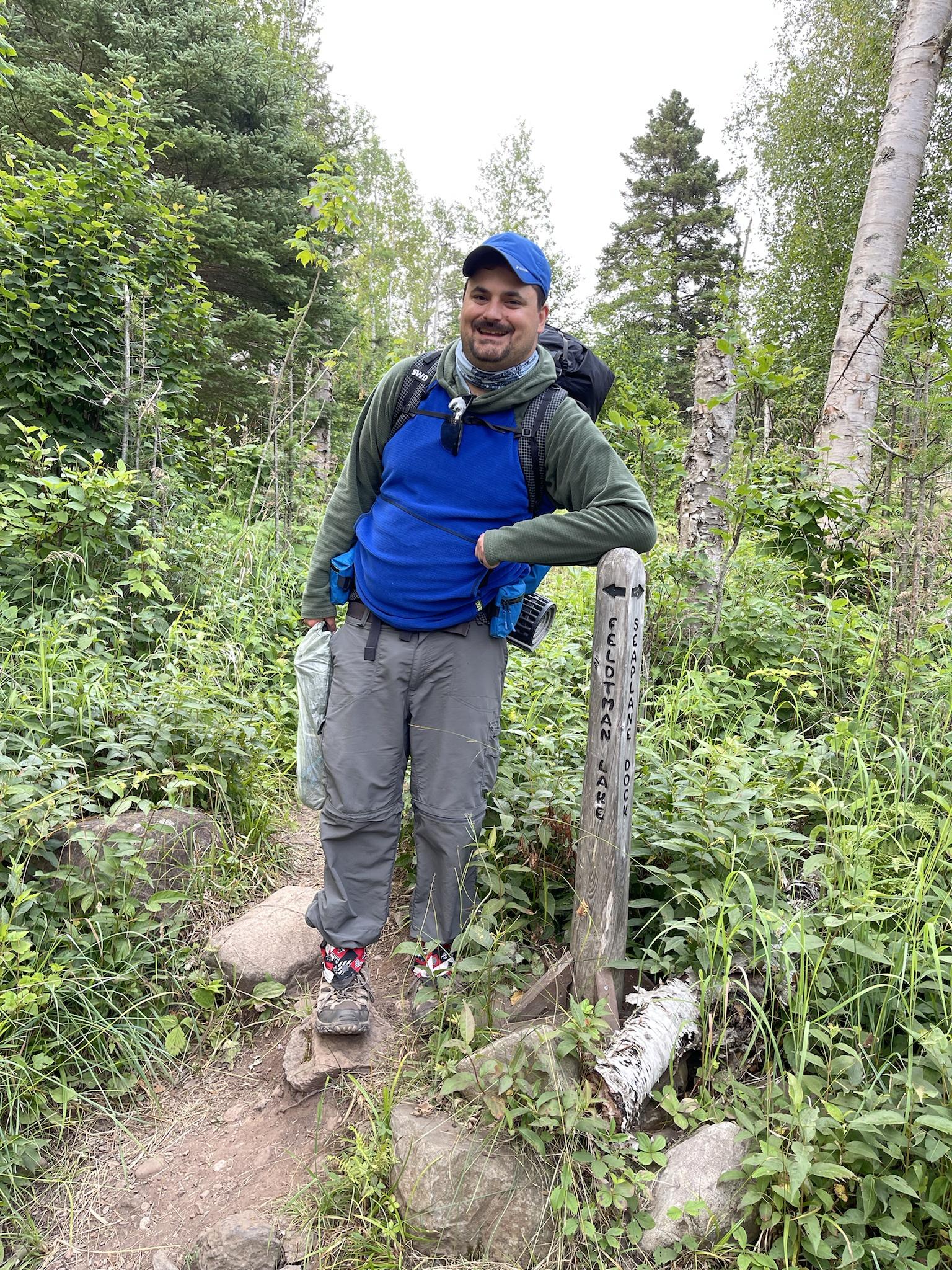 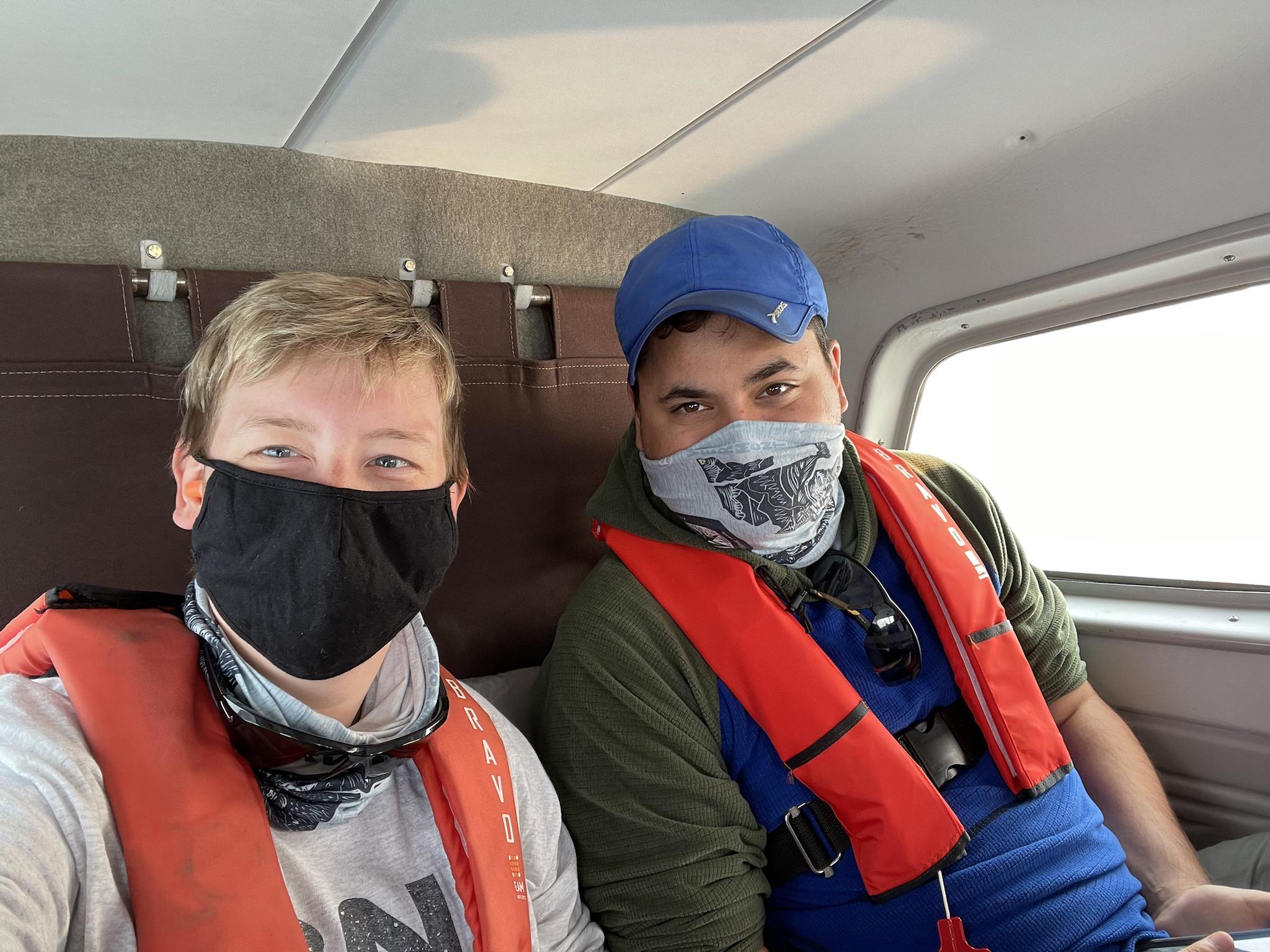 We re-entered society by getting a second breakfast at soumi restaurant downtown. Excellent place for breakfast if anyone is wondering. After that we began our long drive home stopping to get a few car snacks (I was craving fresh fruit). We ended up getting a bit tired around the bridge and decided to book a night in st ignace. I am glad I booked it on my phone when I did because as we approached the bridge we heard it was closed. They had shut it down for a bomb threat. We joined hundreds of other people parked along the road in st ignace waiting to cross. I eventually found my way through traffic to get to the hotel and the sign buzzed "no vacancy". It filled up quick because no one knew how long it was going to take to re-open the bridge. The parking lot was like a tailgate. Folks had their lawn chairs out, beers being sipped, all while they waited in gridlock traffic. 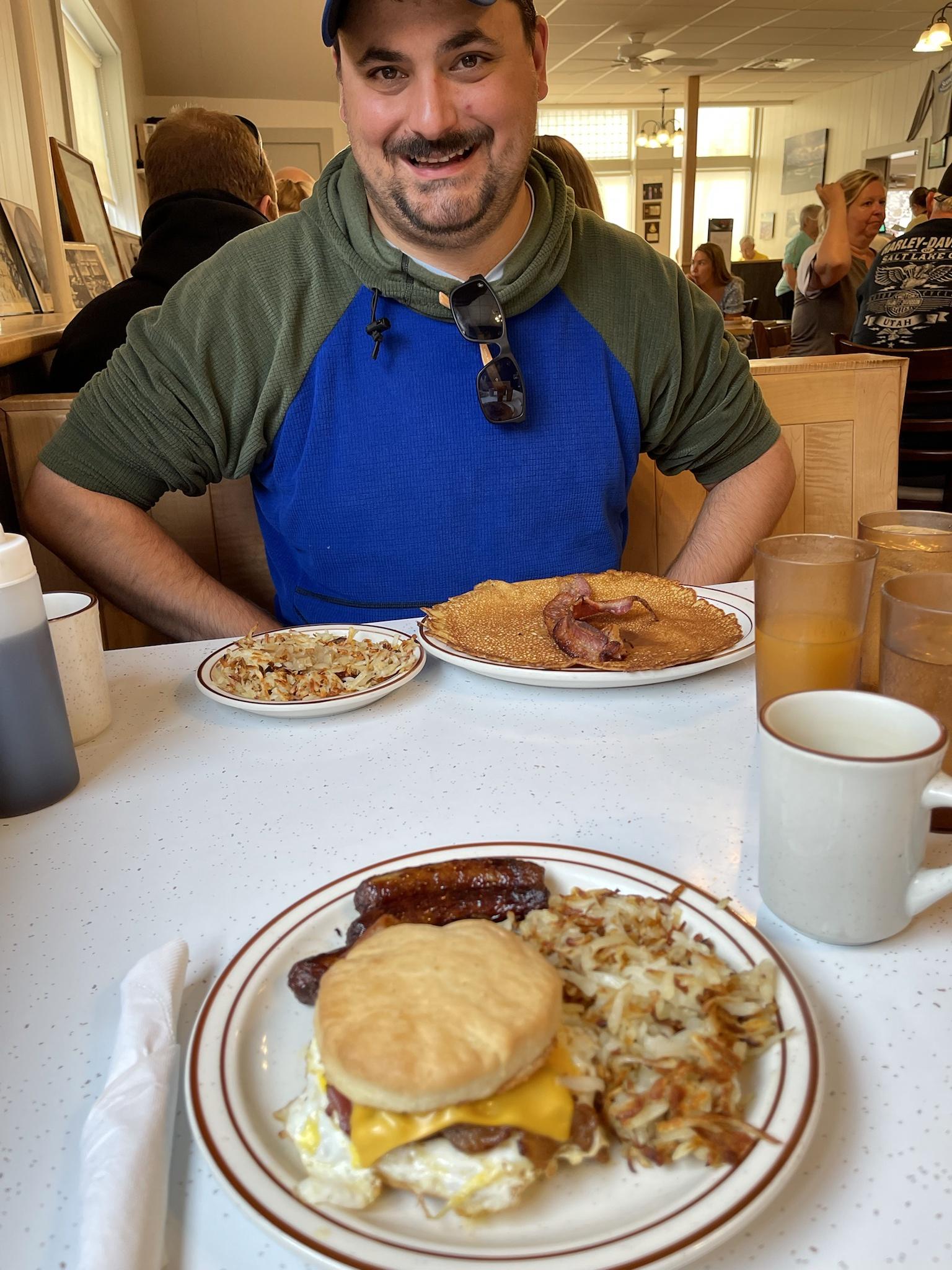 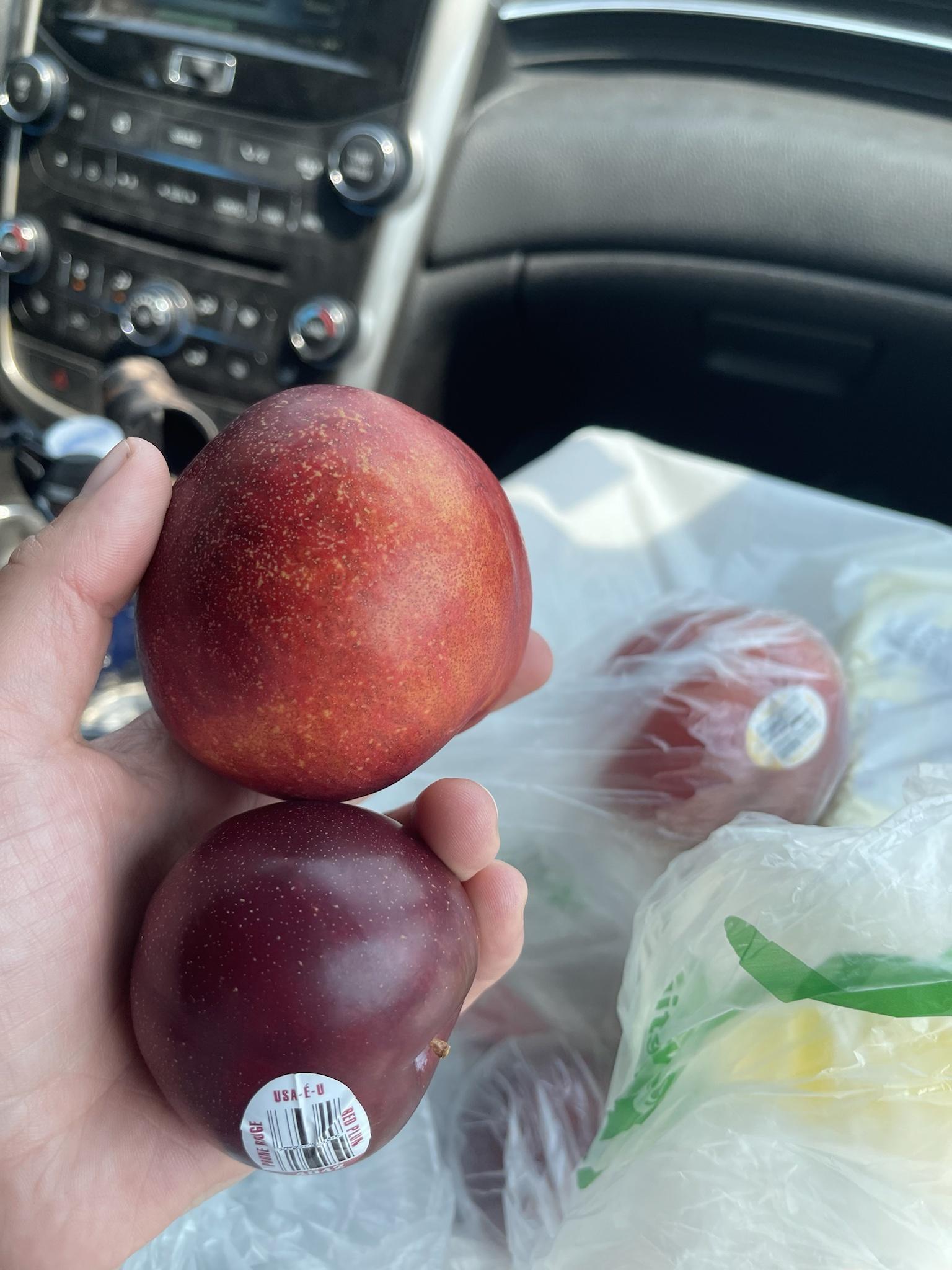 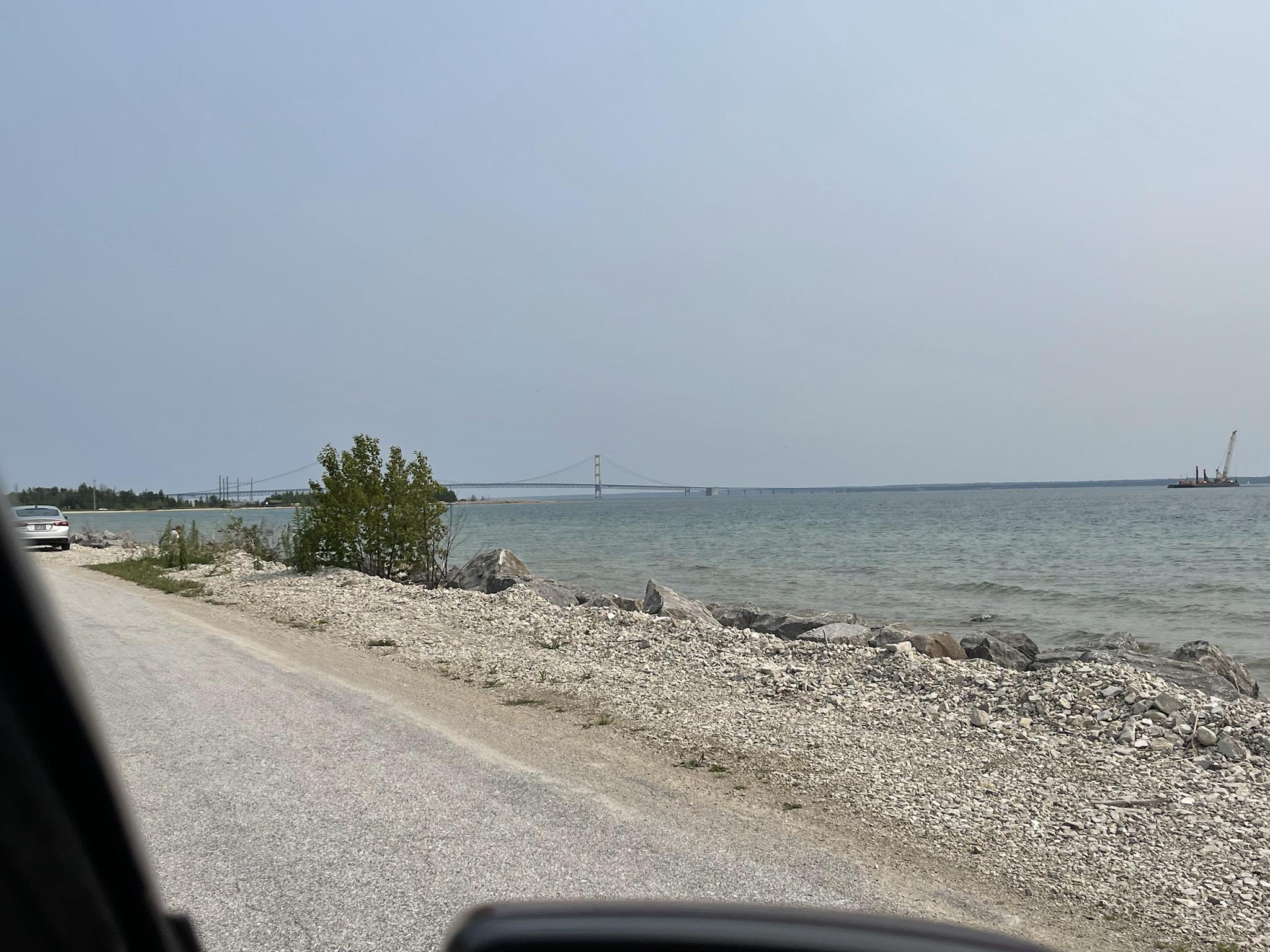 This was the end of our adventure. The bridge eventually re-opened and after a night in the hotel, refreshed and ready to go, we made it home in no time.

Thanks for reading. Hope you enjoyed it.