Due to reasons, we planned to leave around midday. Early on the morning of the 27th, those reasons evaporated, and my friend and driving companion could leave as soon as I was ready. Unlike other years, where I stay up until the bitter early-morning end, I went to bed at a reasonable hour because I thought I had all the next morning to wrap up (unlike KP, this year's traveling companion, whose pack was packed a month prior to our departure). Still, we were able to leave in time to make a stop at Keweenaw Co-op Market & Deli for fresh food before they closed and also make it to Bella Vista Motel at a more reasonable hour.
Last edited by Kelly on Wed Jul 14, 2021 11:45 am, edited 3 times in total.
2012 | 2016 | 2017 | 2018 | 2019 | 2020 | 2021 | 2022
Top

The day dawned bright and calm. Outside our motel room we met the other four members of our party, who arrived early that morning due to a diversion for delicious Thai food somewhere in the UP. We all prepped for the trip over with hot beverages and pastries from Jamsen's.

My first visit to ISRO was on the Queen IV, and this crossing was as uneventful as the last, except with cute signs about staying one moose length away from the other passengers (or two foxes, or three beavers, or something). Hooray for cheesy humor! 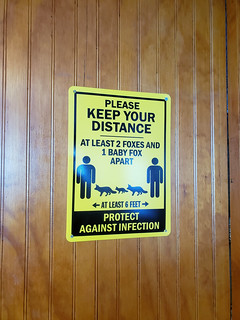 As mentioned elsewhere, our ranger orientation was not the usual review of LNT. It seemed nice that they changed it up more than usual, although shifting the emphasis back to taking care of the wildness is probably warranted, if it indeed has the desired effect.

After permitting and getting a head's up about a likely location for calypso orchids, we were off to Lane Cove. LC was on an itinerary for an earlier trip for some of us, and that year we ultimately decided not to descend because of possible beaver obstacles. While I've been since, it was high on the list of one of our party who had not.

Shortly after the Mount Franklin junction off the Tobin Harbor Trail, I took a thirty-minute snack/read/nap break, and that was the last I saw of any of my traveling companions until Lane Cove. I am an ambler and like to take my time, and I take periodic breaks because my other mode is to keep walking without voluntary pause.

No calypso orchids yet; however, I spotted a lone ram's head orchid on the way down the ridge to Lane Cove.

Drawing near to one of the several beaver ponds between me and my destination, through a partial screen of bushes I saw moose #1 scramble up the far bank. Not a mooseless visit!

At long last I arrived in LC, where KP was set up in site 3 and the others were over in 5. All of the other sites were occupied on this night.

Sound sleep and camping are not my usual fate, unless something interesting happens. As reported by my traveling companions, the Common Loons of Lane Cove held a concert* during the night. I missed all of it.

KP hiked up to Mount Franklin during the day, and I read and sorted through some of the bits of my backpack that had been hastily packed due to the nature of our departure, and oh joy! found the solar print paper that I thought had been left behind. Thus spent part of the day making solar prints.

It was such an enjoyable and relaxing day that we all declared we could spend another day at Lane Cove.

The other four members of our party moved from site 5 to site 4. That's probably when I noticed an unauthorized campfire ring between the two sites. Without a shovel, it wasn't easy (or possible for me) to break it up, but I made do.

In the evening, three people came over from site #1 and asked to watch the sunset since they didn't have a view. 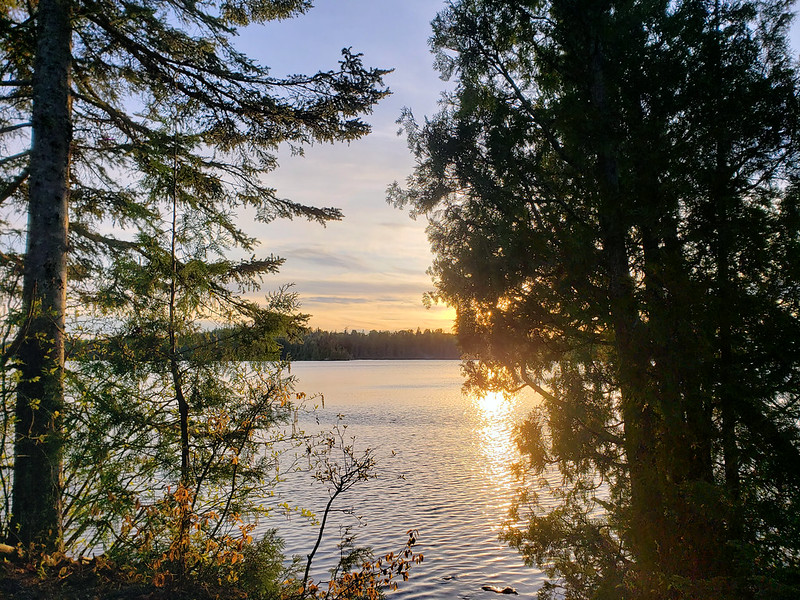 During our conversation, they shared that instead of bringing their smartphones with them, they each brought a disposable camera. I imagine that works well from a couple of perspectives: they were forced to choose well, and among them they probably had about the right number of images for a week-long trip.

KP decided she was ready to start walking, so she packed up and left for...East Chickenbone? West Chickenbone? McCargoe Cove? Who knew? The rest of us stayed put in Lane Cove for another day.

We spent part of the day hiking over to Stockly Bay. On the way over I was the unlucky finder of not one but three smiley-faced Mylar balloons, which could have been waiting to be found for a year, or twenty. Also a pair of sunglasses, all of which made it as far as Rock Harbor in my pack. Also found a metal campfire ring which hadn't seen use for many years and the remains of a mallard (?) egg. 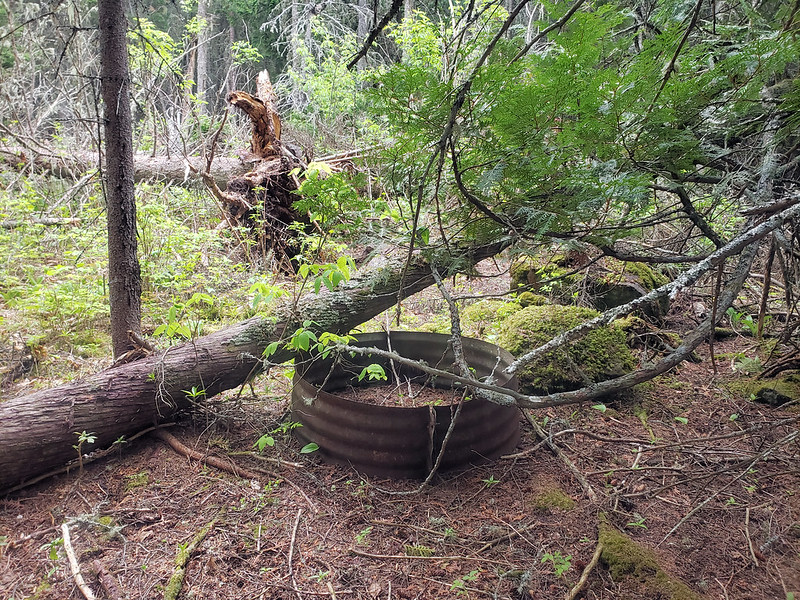 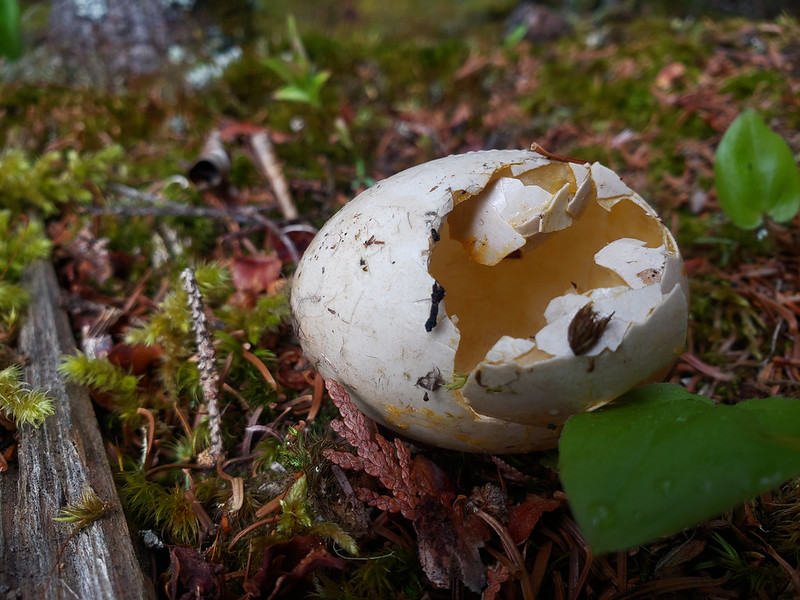 The first rain of the trip began to fall while we were on the shores of the bay. Light sprinkles only, and they didn't last.

The indecision of the previous evening ended on this morning: one of the young ones had been experiencing a mild but increasingly uncomfortable medical issue, and the family had decided to head for Rock Harbor to try to catch a ride on the Queen.

Alas. And yet it was a good decision for them.

We said our good-byes and then I headed out for East Chickenbone at my usual leisurely pace. From a Lane Cove Trail bridge caught sight of a cow and calf feeding in a beaver pond. Hung out at Mount Franklin for a while. By the time I got to the Mount Ojibway tower, I was beginning to wonder if I really wanted to get to East Chickenbone that day. If I didn't, there would be no new campground on this trip. If I did...well, it was starting to feel less like something I wanted to do.

Another bright and beautiful day on Isle Royale! I took my breakfast out to the dock, where there were four people waiting for Voyageur II and wondering why it was late. It turned out they were early—VII always runs on CDT rather than EDT. Chatted with the guy who had a packraft—he'd come on it from Rock Harbor the day before and was now headed to Chippewa Harbor. Someday I'm bringing my own boat and am curious about the different ways one can carry a boat. Not that there are that many.

After VII departed, I turned my attention to finding a sunny waterfront shelter, which I did. After the move, I considered my plans for the day. Since adjusting my itinerary, I needed a new thing for this trip and decided that spending two consecutive nights at Daisy would be part of that. Another part would be exploring the area around Daisy for mining evidence. The super-old topo map I use has six mine shaft symbols dotting the area, and now there was time to explore.

Out of the six, I explored the area around three of them and found...a nice patch of ram's head orchids! These are but a sample: 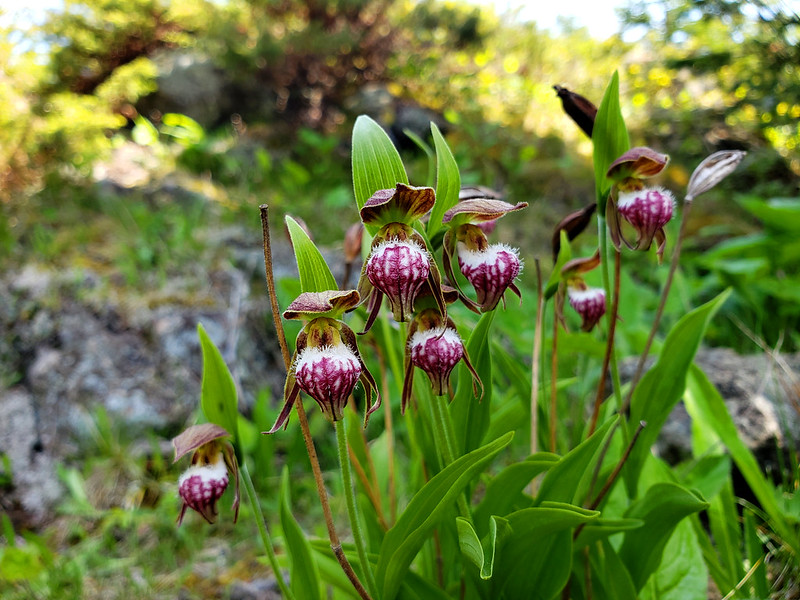 That's some stupendous ambling! But will there be calypso orchids in future installments? I'm on tenterhooks.

I'm also curious about the dormant fire ring. It doesn't exactly look surreptitious --- is it a decommissioned, formerly sanctioned site? Or the work of a scofflaw who scoffed big?
Top

torpified wrote: ↑Thu Jul 15, 2021 6:18 am I'm also curious about the dormant fire ring. It doesn't exactly look surreptitious --- is it a decommissioned, formerly sanctioned site? Or the work of a scofflaw who scoffed big?

torpified wrote: ↑Thu Jul 15, 2021 6:18 am But will there be calypso orchids in future installments? I'm on tenterhooks.

Too soon to tell! 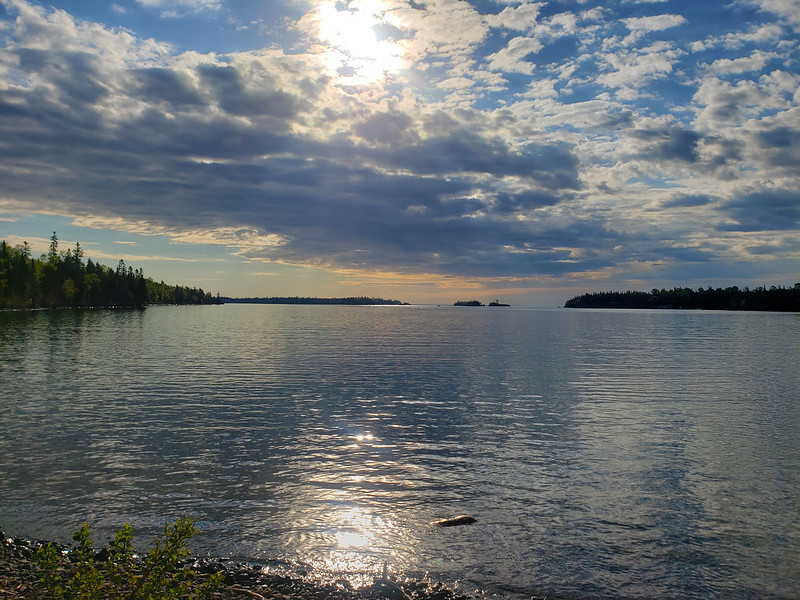 Another hike in the woods, where all is not peace and love: 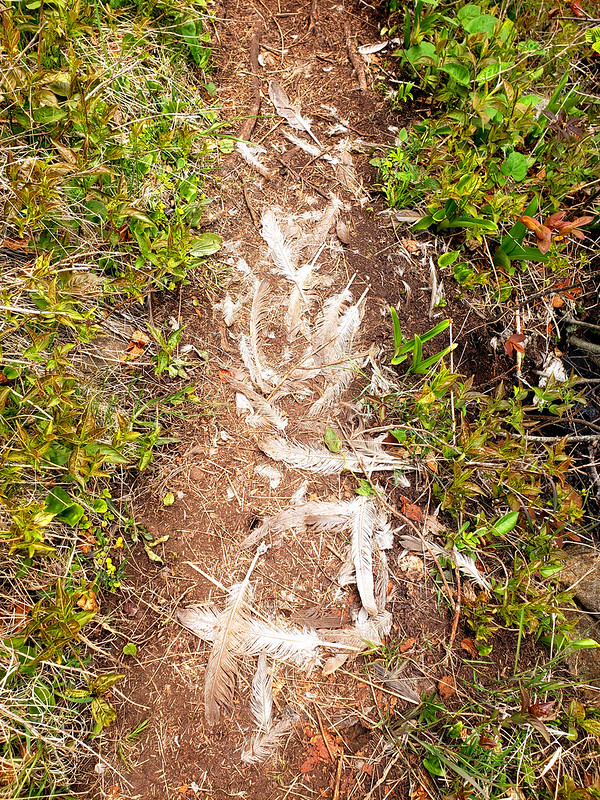 Along the way, two people passed me, carrying little else but life jackets. Upon arrival in Three Mile, I learned from other hikers that their boat had run out of gas back at Daisy. They happened to drop their extra layers to dry out in my favorite Three Mile shelter.

Morning at Three Mile, where the clouds gathered: 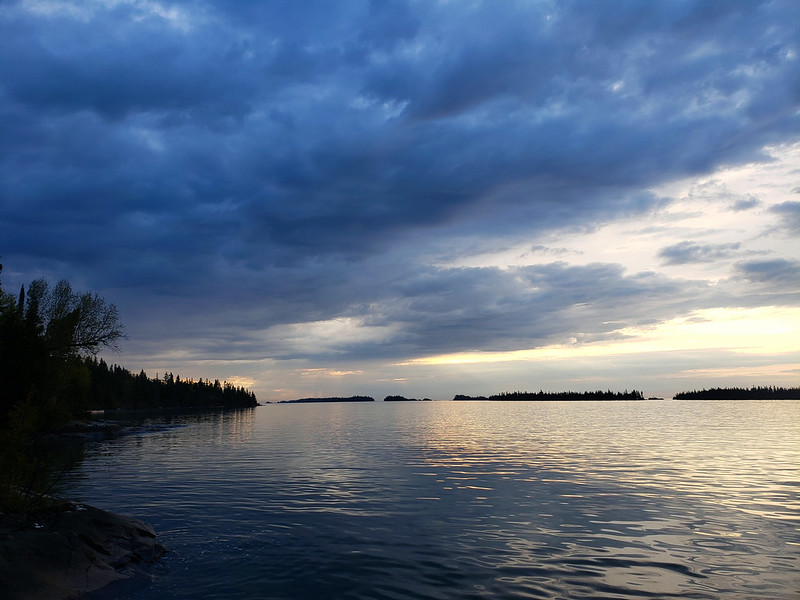 Before leaving, I taped another note to KP on the Three Mile map.

Not long after hitting the trail, rain began to fall. Every time I thought about pulling out my rain jacket, it diminished. Once, the sound of wind came rushing over Tobin Harbor towards me. Only it wasn't wind—to my delight, it was rain!

Also to my delight—it was on the Tobin Harbor Trail that I encountered my only calypso orchid of this visit. Here I bring you more of an idea of a calypso orchid: 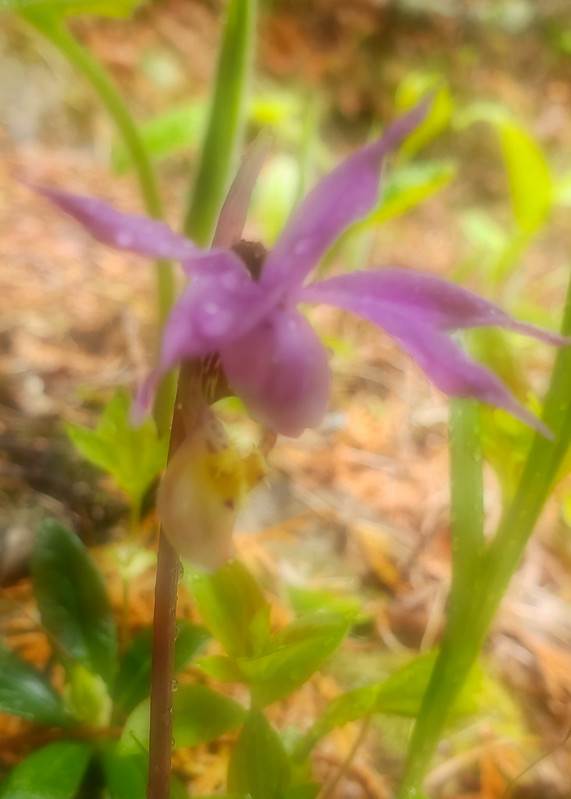 Another delightful sight awaited me in Rock Harbor: 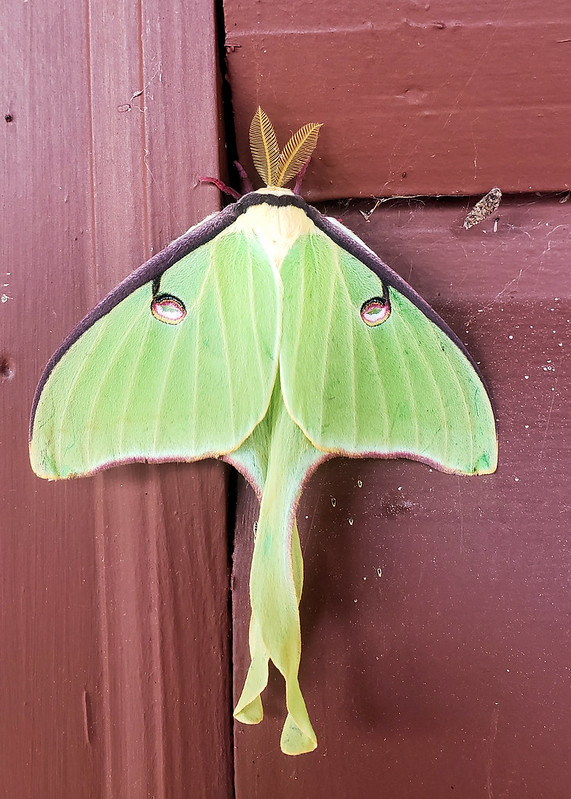 After a few visits, I decided to be intentional about taking one of the Sandy tours. Last year was the first year I tried to give life to those intentions, and this year was the second. In both cases, of course, COVID had other ideas.

Yet! There was the dream to take a boat out on Tobin Harbor, and my adjusted itinerary and ferry choice made it possible.

I arranged for a half-day kayak rental at the marina and did just that, paddling out onto Tobin Harbor while others waited on the dock for the seaplane to arrive. Calmish water, blue skies, and bird calls were my companions as I slowly made my way toward the mouth of the harbor, passing Hidden Lake Dock and private cabins along the way.

Hiking the trails of Isle Royale is a favorite thing; paddling on calm-to-calmish water in lovely weather surpasses it. 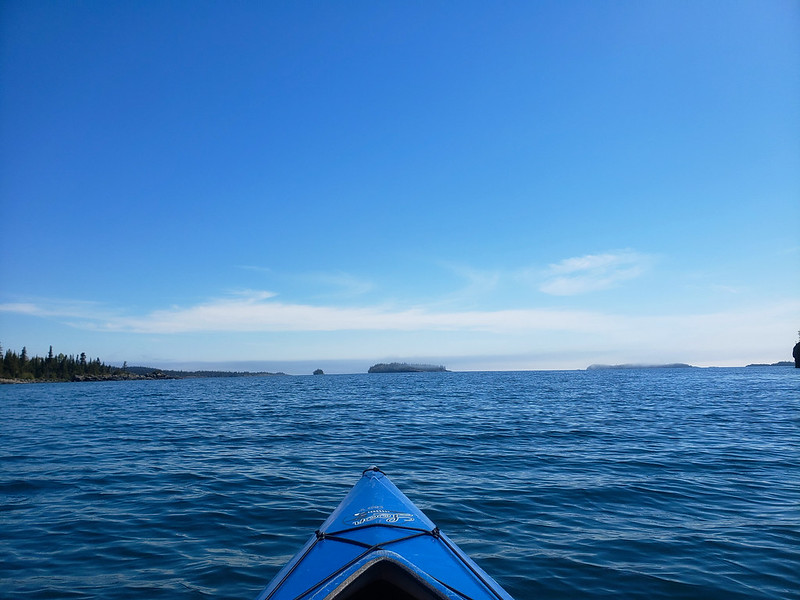 And then! On my way to return the paddle, KP appeared! After Lane Cove, she'd spent a couple of nights at West Chickenbone, and then Moskey Basin, and finally Three Mile. She'd just come into Rock Harbor with her own stories, and we caught up as we waited to board the Queen.